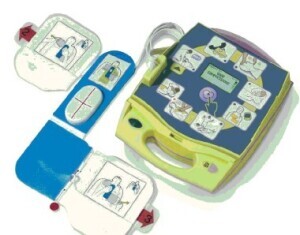 AED Plus Automated
External Defibrillators
Zoll Medical has recalled its AED Plus automated external defibrillators following the deaths of two patients. According to a letter sent to customers, the patients died because the Zoll defibrillators failed to deliver a life-saving shock.

Used by emergency or medical personnel and others who have completed CPR AED training courses, or the public at large, the Zoll AED Plus defibrillator is intended to treat patients having a heart attack (cardiac arrest). The device analyzes an unconscious patient's heart rhythm and instructs the user to press a button that delivers an electrical shock to the heart to restore a normal heart rhythm.

The FDA has deemed the Zoll AED Plus defibrillator recall class I, its most serious type of recall. Class I recalls are issued when there is a reasonable probability that use of a device will cause serious injury or death.

According to the letter, the company has received reports that following a long period (typically greater than four years) without use, a Zoll AED Plus may prompt "change batteries" during use and fail to deliver a defibrillation shock, which could result in failure to resuscitate a patient. In some instances turning the device off completely, waiting for at least ten seconds for the unit to re-set and then turning it back on has restored the unit's ability to deliver defibrillation therapy as intended.

According to the customer letter, the Zoll defibrillators may have failed because of faulty battery test software installed in the devices. The test software "does not adequately detect defective batteries," the letter said. It appears that the identified problem is most likely to occur with units that have been in the field for longer than 3 years, a population of approximately 80,000 units.

Changing the batteries in the device will not prevent its failure. Zoll said customers should update the device software, which can be downloaded for free at www.ZOLLAEDPlusbatteryhelp.com.

Zoll has confirmed that it received one report of a clinical event in which a defibrillation shock was not delivered, the patient subsequently died. An evaluation of the device found that the batteries experienced the identified problem. A subsequent review of all reported patient events found up to three additional cases in which a shock was not delivered to a patient, and the battery may have experienced the identified problem. According to the letter, one of those patients subsequently died.

The recall applies to all Zoll AED Plus devices manufactured prior to February 12, 2009 may be affected, a total of approximately 180,000 units. The devices involved in the recall carry serial numbers
"below X _ _ _200000".

At this time Zoll is not recommending the removal of any AED Plus defibrillators from service. Affected units will be capable of detecting defective batteries during the self-test after the recommended software upgrade. Once the software upgrade has been installed, batteries on the device should be changed every three years. If the Zoll AED Plus defibrillator shuts off or otherwise malfunctions during patient therapy, continued CPR is recommended.