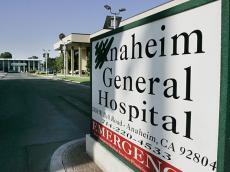 The Joint Commission, a private organization that inspects and accredits most of the nation's private hospitals warned Anaheim General that it could lose its accreditation earlier this year, but the hospital's owner, Pacific Health said in August that the problems had been corrected. However, the commission withdrew Anaheim General's accreditation after deciding that conditions found during a March inspection still posed a threat to patients. The loss of accreditation, coupled with many safety citations puts the hospital's funding at risk, but it is not expected to close.

The commission found 47 safety deficiencies -- a very high number. Usually a hospital must have fewer than 18 deficiencies to keep their full accreditation.

The state Department of Public Health fined the hospital in August for problems that could have caused or had caused serious injury or death to patients. State officials cited Anaheim General for failing to ensure that medical devices were safe and functioning within manufacturer's guidelines, for not preventing access to dangerous items, for failing to protect patients from extreme temperatures and for failing to keep medications properly refrigerated.