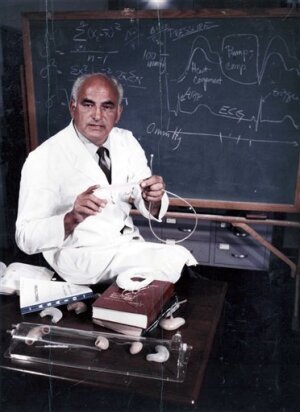 Dr. Kantrowitz performed the first human heart transplant in the United States, three days after the world's first was performed in South Africa. But the transplant on an infant who died several hours later, was only a small part of his life's work to solve the problem of heart failure. Kantrowitz was an inventor and for decades continued to improve the left ventricular assist device or LVAD, which would later lend its name to his Detroit-based research company, L-VAD Technology Inc. The device is designed to be permanently implanted in patients with otherwise-terminal heart failure, helping their hearts to circulate blood and allowing them to leave the hospital.

Born on October 4, 1918 in New York City, Dr. Kantrowitz attended New York University and the Long Island College of Medicine, now part of the State University of New York Downstate Medical Center. He served in the Army Medical Corps during World War II, and upon returning from service, he entered the emerging field of cardiac surgery. He practiced and conducted research in the 1950s and 1960s at Brooklyn's Maimonides Medical Center. In 1970, Dr. Kantrowitz moved his federal funding and team of residents and other staff to Sinai Hospital in Detroit to better accommodate his research.