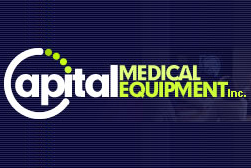 The future is looking even brighter for Capital Medical Equipment, Inc., Matawan, NJ, since radiographer, Sharon Moore, RT (R), has come aboard.

Moore has known the company's president, Barry Weinstein, for over 20 years, she says, while she worked as a hospital radiographer, administrator and professor of radiologic sciences at a variety of hospitals in the New York metropolitan area. Her bachelor's degree is in radiation sciences.

She joined forces with Capital Medical a little more than a year ago and received her DOTmed certification in April.

Weinstein started Capital Medical Equipment over seven years ago and also was a founding member of IAMERS, which promotes ethics and professionalism in the international medical equipment industry. He sat on the organization's board as a PR director.

Moore says while Weinstein was selling all types of medical imaging equipment, she was serving a 35-year stint that included working as: a certified X-ray technologist at various hospitals in NY and NJ; as a hospital administrator at Columbia Presbyterian Hospital in Manhattan and Irvington General in NJ; and as a professor of radiologic sciences at St. Michael's Medical Center in NJ.

Later, she became a professor and clinical coordinator at Muhlenberg Regional Medical Center in NJ.

"My roles at the hospitals varied," Moore says. "I was a general radiographer, I performed radiation therapy on cancer patients, worked in nuclear medicine, and set up and structured quality assurance department programs. I was a technical coordinator, vice president of nine divisions within a small community hospital, and an educator in radiography, nuclear medicine, ultrasound and radiation therapy. My strongest emphasis was on equipment operations, maintenance and radiation physics for the areas mentioned. I had helped Barry in the past and he had always asked me to join him," she says.

Because she is expertly familiar with most diagnostic imaging equipment, Moore believes she can bring something to the table that many salespeople cannot.

"The other issue," she says, "is that I've always been service-oriented because I took care of patients. If you can make patients happy and at ease when they are ill, you can make anybody happy."

Moore says that Capital Medical has a extensive client base of both end users, dealers and brokers.

When asked what her top selling equipment types are, she says, "People buy equipment in waves. CT always seems to be strong, general radiographic rooms, MRIs and C-arms are doing well now."

Moore tells DOTmed that while she's been with Capmed for less than a year, she "sees the company expanding in the long-term. Barry and I see ourselves bringing other salespeople into this arena, from a source of high-caliber people I've known throughout the years, who want to go into sales."

Having retired from hospital work, Moore enjoys the flexibility of working in sales.

"For the first time in 35 years, I'm not pinned down to a desk in an office. I can take my phone and go anywhere and still communicate with my clients," Moore says.