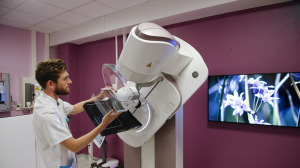 Faster, more comfortable exams with high image quality and accurate interpretations are what providers are looking for in the breast imaging space. Equipment and software manufacturers are focusing on just that with their new products and upgrades.

Companies are also looking for better ways to predict a patient’s risk of developing breast cancer and are streamlining the genetic testing process.

Here’s a look at what’s new from several companies.

“This beam-forming technology is really a game changer,” said Dan Skyba, senior director of ultrasound business unit. “You're getting really phenomenal spatial resolution and less noise in the picture.”

The system also offers a higher frame rate for faster sweeps without loss of image quality, up to a 100% increase, according to Skyba.

“In today’s demanding environment, we've got to have quality exams but we need to have efficiency,” Skyba said. “The system absolutely keeps up with you.”

The new beam-forming technology is coupled with ultrahigh frequency transducers, including a 33 MHz transducer and a 24 MHz transducer that can now image at greater depths and see finer detail.

“In breast imaging, you want to use the highest frequency you can to get the best detail, but with the higher frequencies, you have less penetration, so they're only useful for very shallow depths,” said Karen Wager, senior manager of clinical development at Canon Medical. “But with a new beam-former, we've been able to really expand the utility of the 24 MHz transducer. I can scan down to 5 centimeters, so it's opened up the ability to scan much deeper in the body and much larger breasts. And now with the 33 MHz transducer, we’re also able to see beyond 3 centimeters, so it’s even more useful in a breast application. We weren't able to do that consistently before the Prism Edition.”

Canon also offers 17 MHz and 22 MHz high-frequency hockey stick transducers that can be used for examining lymph nodes or performing a biopsy.

The Aplio i-series Prism Edition comes with a technology called Full Focus which improves image uniformity and spatial resolution from near to far field and reduces the need for sonographers to manage ultrasound focal zones within the field of view . There are also features to optimize the workflow for breast ultrasound, such as a smart body mark, a breast scan guide and reference imaging. The system automates body markers based on the transducer position, and displays areas on a pictogram to show the sonographer where they’ve scanned. With reference imaging, prior ultrasounds or a mammogram, can also be displayed on the system.
1(current)
2
3
4
5
6
7 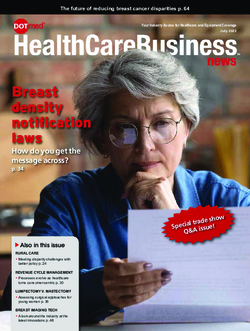