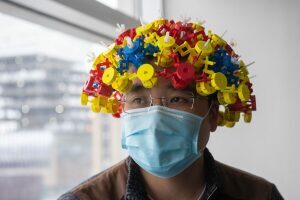 The helmet increases the signal-to-noise ratio of MR system to enhance the quality of images
Researchers at Boston University have developed a colorful helmet they say can be used in conjunction with MR scans to produce better quality images for medical diagnosis.

The dome-shaped device is made of magnetic metamaterial resonators composed of 3D-printed plastic tubes wrapped in copper wiring. The resonators are precisely arranged to channel the magnetic field and boost the signal-to-noise ratio of the MR machine to help it produce higher quality images at twice the normal speed. An individual simply dons the helmet on their head during a brain scan.

Lead developer Xin Zhang, a professor of mechanical engineering at BU’s Photonics Center, believes the solution has the potential to lower the cost of MR and reduce exam time for doctors, radiologists and patients. “Theoretically, any pathology involving the brain may be addressed, including stroke imaging, cancer, or degenerative brain diseases. However, this is an early prototype of a potential approach to leveraging metamaterials for brain MR and will still require ongoing translation efforts toward clinical application,” she and her colleague, Dr. Stephan Anderson, section chief of abdominal imaging in the department of radiology at Boston University Medical Center, told HCB News.

Magnetic metamaterials are a type of engineered structure created from small unit cells. These cells may not do much alone, but together they gain new capabilities such as being able to bend, absorb and manipulate electromagnetic waves, sound waves, or radio waves.

The scientists previously used them in 2019 to create a flat array that can be placed near the part of the body being scanned to improve image quality. In a test in which they scanned chicken legs, tomatoes and grapes on a 1.5T MR system, the addition of the flat array created a 4.2-fold increase in SNR.

As a result, the researchers see the flat array and helmet technologies as additive tools that can increase the imaging power of lower-strength MR systems and spare hospitals from investing in costly upgrades for high-end powered scanners that come with higher safety risks. They also believe that the metamaterial could be used one day in ultra-low field MR, which relies on magnetic fields that are thousands of times lower than those of standard machines. This could help expand the availability of MR technology in developing countries and worldwide.

“If you are able to deliver something that can increase SNR by a significant margin, we can start to think about possibilities that didn’t exist before,” said Anderson back in 2019. This includes the possibility of having MR near battlefields or in other remote locations, he added. “Being able to simplify this advanced technology is very appealing.”

Other helmet technologies for imaging the brain in more affordable ways are in the works. Back in 2018, researchers at Vanderbilt University built an AI-equipped, hat-shaped interface that integrates ultrasound and electroencephalogram technology for real-time imaging. This could help understanding of how actions and emotions stimulate different parts of the cranial organ, so that people may use their thoughts to direct software and robotics in performing tasks.

In 2016, West Virginia University created a lower-dose portable PET scan system that when worn, could potentially scan people in motion at a tenth of the radiation used by a full scale, fixed PET machine. This would enable better assessments and diagnosis of conditions such as Alzheimer’s and Autism and reduce scanning time.