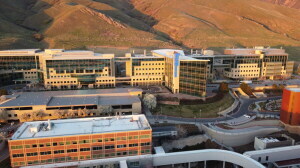 The $31 million center is the first proton therapy facility in the Mountain West and one of 37 run throughout the U.S. It is expected to help Utahns avoid having to relocate weeks at a time for PT treatment at other PT facilities, the nearest of which are more than 700 miles away.

"For the past 10+ years, we have been sending an increasing number of appropriate patients to proton centers, all over 12 hours from Salt Lake City. Having proton therapy here in the Salt Lake, allows patients and their families the ability to stay in town for treatment. This is not only more convenient for patients and families but also ensures that the multidisciplinary aspect of cancer care keeps radiation at the same facility in which surgery and chemotherapy are occurring," Dr. Matthew Poppe, radiation oncologist at Huntsman Cancer Institute and University of Utah Health, told HCB News.

The three-story center is 7,450 square-feet and home to a 110-ton gantry, which holds a 15-ton cyclotron that can accelerate protons to two-thirds of the speed of light. This allows treatment to be administered to tumors from the best angles and avoid hitting organs and healthy tissue. It also will utilize a special combination of PT delivery and CT imaging for state-of-the-art tumor targeting. A similar approach is currently underway in Germany, with a prototype in the works that incorporates real-time MR imaging into proton therapy for better targeting.

Housed inside the center is a Mevion S250i Pencil Beam Scanning System, a single room solution that allows for significant reduction in overall size relative to other systems and reduces cost. It can be placed in a small available space adjacent to the institute's existing operations, allowing experts to stay close to patients. The system is equipped with Mevion's Adaptive Aperture to sharpen dose gradients, which reduces dose spillover to sensitive structures, and its Energy Switching Time, which improves treatment for moving tumors.

The facility is expected to care for approximately 200 patients annually once it is fully operational. Both adults and pediatric patients will be treated there under the supervision of a team of specially trained medical doctors, technologists, technicians and other staff members. Helping it will be partners, including the University of Utah Health, Mevion Medical Systems, Siemens, University of Utah Campus Design and Construction and Huntsman Cancer Foundation.

While seen as a more advanced and efficient radiotherapy option, demand for proton therapy is half of what it was five years ago, according to a recent MEDraysintell report published in March. Factors driving the dip in demand include negative publicity and cost barriers to treatment, with one of the biggest challenges being resistance from health authorities and private insurers to reimburse providers for it.

“Proton therapy, like any business in the medical field, is directly affected by reimbursement policies, which differ in each country or region worldwide. Generally, countries that have a proton therapy center have a reimbursement policy for proton therapy implemented by their national health insurance system and/or covered by private insurances,” Paul-Emmanuel Goethals, co-founder of MEDraysintell, told HCB News at the time.