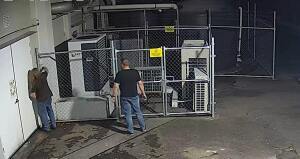 Police are looking for two men who tampered with an MR chiller unit and caused over AUS150,000 dollars in damage for a radiology clinic
Australian police are on the lookout for two men caught on camera tampering with an MR chiller unit that led to an explosion and over 150,000 Australian dollars (more than $114,000 USD) in damage for a small radiology practice.

Around 1:00 a.m. on February 20, CCTV cameras captured a pair of men turning off the switch for the MR chiller unit at the back of the Queensland Radiology Specialists clinic. This led the helium in the scanner to expand until it exploded, according to Queensland Police Service.

“We have no idea why we were targeted or if they will come back,” Patrick Bergin, the owner-director of the clinic told the Daily Mail Australia. “Perhaps it's just a couple of drunks that were looking for something to do but we really don't know. We are pretty baffled.”

The explosion took place eight hours after the switch was turned off, when patients were inside the clinic. The ducted quench pipe, a built-in safety mechanism, absorbed the explosion.

The clinic, which performs procedures for cancer patients, pregnant women, and those with serious injuries was out of commission for four days until experts from Sydney arrived to repair the machine, reported the Daily Mail Australia.


Any faults in the unit’s piping could have led to a potentially more serious incident with injuries to people in the clinic and more damage done to the $1.8 million facility, says Bergin, who says the incident was, “unsettling. The staff have been stoic and all our patients were all very understanding and supportive about the disruption.”

The suspects were seen in the footage wearing blue jeans and black shirts. They are wanted for “willful damage” as a result of their actions.

Police are calling for both men to come forward and for anyone who may recognize them to contact police immediately.