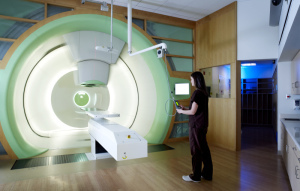 "We compared the effects of delivering the same amount of energy or dose into cancer cells using a dense energy deposition pattern with LEAP versus spreading out the same energy more diffusely, which is typical of conventional photon and proton therapy," said radiation oncologist Dr. Robert Mutter, co-principal investigator of the study. "Surprisingly, we discovered that cancers with inherent defects in the ATM-BRCA1-BRCA2 pathway are exquisitely sensitive to a new concentrated proton technique."

A variety of internal and external forces create tens of thousands of DNA lesions daily. Cells use evolved complex repair pathways to repair the damage, but defects in these pathways can lead to the development of diseases, including cancer.

Using a dense energy deposition pattern, Mutter and his colleague, Zhenkun Lou, the other co-principal investigator, applied LEAP, which is an acronym for biologically enhanced particle therapy, to tumors with inherent defects in the ATM-BRCA1-BRCA2 DNA repair pathway. These types of defects are commonly found in cancer, with breast and ovarian cancer mutations in BRCA1 and BRCA2 repair genes being the most common cause.

They found that cancers with inherent defects in the ATM-BRCA1-BRCA2 pathway are more sensitive to a new concentrated proton technique compared to when the same amount of energy is dispersed more diffusely in conventional photon and proton therapy. The technique spared healthy tissues from exposure to radiation therapy and allowed their full complement of DNA repair elements to remain intact. In addition, the researchers were able to alter DNA repair mechanisms by co-administering an ATM inhibitor, a regulator of the body’s response to DNA damage, which enhanced the sensitivity of repair-proficient cells to LEAP.

Mutter and the radiation oncology team at Mayo are currently developing clinical trials to assess the safety and efficiency of LEAP for multiple types of cancer.