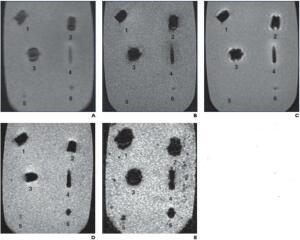 MR scan of nonferromagnetic ballistics, courtesy: American Roentgen Ray Society (ARRS), American Journal of Roentgenology (AJR)
Patients with ballistic embedded fragments are frequently denied MR scans, because the bullet composition is often not known and ferromagnetic material could cause further damage by responding to the magnetic charge of the scanner, but new research shows that radiography and CT can be used to identify projectiles in bullet wounds that are safe for MR scanning.

"Commercially available handgun and shotgun ammunition representing projectiles commonly encountered in a clinical setting was fired into ballistic gelatin as a surrogate for human tissue," said first author, Arthur J. Fountain from the department of radiology and imaging sciences at Emory University.

Importantly, heating above the FDA limit of 2 degrees Celsius was not observed in any of the projectiles tested.

The authors presented a triage algorithm for patients with retained ballistic fragments. "In particular," Fountain et al. described, "a projectile that leaves a metallic debris trail from entry to final position or has been appreciably deformed is of copper, copper-alloy, or lead composition with a partial jacketed configuration or represents lead shotgun shot and does not pose a significant risk for imaging at 1.5 T or less, regardless of when the injury occurred."

"Nonferromagnetic ballistic projectiles do not undergo movement or heating during MR scans, and the imaging modality can be performed when medically necessary without undue risk and with limited artifact susceptibility on the resulting images, even when the projectile is in or near a vital structure," the authors concluded.

The study was published in ARRS' American Journal of Roentgenology (AJR).