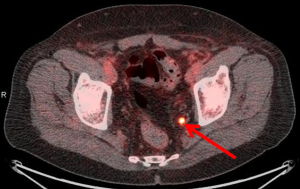 Research from a randomized phase II/III EMPIRE-1 trial (Emory Molecular Prostate Imaging for Radiotherapy Enhancement) shows that patients whose cancers returned after their prostate was surgically removed were more likely to receive a disease-free status and survive longer if treatment planning included the tracer, compared to those who only underwent conventional imaging. The findings were presented at the 2020 ASTRO annual meeting.

“Molecular imaging in general is currently undergoing a renaissance, and we can expect PET to be playing an increasingly larger role in patients' workups and treatment planning decisions over the next few years,” co-principal investigators Dr. Ashesh Jani, FASTRO, a professor of radiation oncology at Winship Cancer Institute at Emory University, and Dr. David Shuster, a professor of radiology and imaging sciences at Emory, told HCB News.

Study participants received either conventional imaging or fluciclovine, a PET scan that incorporates radioactive tracers containing a synthetic amino acid. As the cancer absorbs more of the tracer, it becomes more detectable, due to cancer cells using more amino acids than other cells.

Among those scanned with fluciclovine, 75.5% received a clean bill of health after three years, compared to 63% screened with conventional imaging. This status persisted for up to four years for the entire fluciclovine group, compared to 51% of the conventional imaging group, and no statistical differences in provider-reported severe genitourinary or gastrointestinal side effects were found between either. Investigators assert that the tracer enabled better patient selections by identifying and excluding those with extra-pelvic disease who are more susceptible to failure, as well as the ability to better define the tumor and treatment field.

Unlike bone scans, CT and MR, PET can detect higher levels of injected radiotracer activity within cancer cells, thereby more accurately identifying the presence and location of developing tumors. The findings here show promise for the 20%-40% of men whose prostate specific antigen levels rise after the surgical removal of their prostate, a sign that their cancer has returned. This group faces high failure rates for post-surgical radiation treatments.

The study is the first to show ensuing improvement in patient outcomes, and the agent has been incorporated into NCCN guidelines for the restaging of recurrent prostate cancer, having gained FDA approval in 2016. The findings also help pave the way for regulatory approval of PSMA, a new PET scan that uses a radiotracer to target a receptor on the surface of prostate cancer cells, and may be even more effective than fluciclovine in improving cancer control. Jani and Shuster are already investigating its potential. They hope that their findings on fluciclovine will help create wider adoption of PET as the standard for treatment planning among these patients.

“At this point many providers seem to be engaged with ordering fluciclovine for recurrent prostate cancer patients,” they said, adding that “overall survival may be a challenging endpoint for any imaging study, but longer follow-up will reveal whether improved selection of patients and treatment decisions/planning can help achieve this goal.”