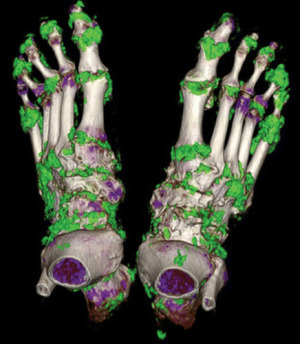 That’s what researchers at Vancouver General Hospital are saying after finding that the advanced form of imaging, which combines elements of CT and MR technology, provides value to routine interpretations of ED imaging studies.

"Dual-energy CT scans at two different energy levels, which produces additional data not acquired with regular CT," Dr. William Wong, UBC radiology resident, told HCB News. "This allows one to highlight or subtract certain materials. A common application of this is to highlight and subtract intravenous contrast on images, which can aid in the detection of active hemorrhage and inflammation. Dual-energy CT may also better characterize various masses and lesions, which might prevent further investigations."

The team evaluated all DECT studies performed in the ED between January 1 and December 31, 2016. CT exams were sorted into head and neck, chest, abdomen and pelvis, spine, and musculoskeletal. A board-certified radiologist who was not initially involved in reading the scans reviewed the corresponding reports on dual-energy or spectral examination as part of the study interpretation.

Studies in which DECT was mentioned in the report were a second time, in a randomized blind manner, to determine the impact of DECT on downstream imaging. This was done with the mixed imaging data set only, which simulates conventional CT images. The difference between the numbers of follow-up studies recommended after conventional CT and DECT were converted into U.S. dollars based on the U.S. Centers for Medicare & Medicaid Services Physician Fee Schedule and 2019 Current Procedural Terminology Codes, to estimate a projected cost benefit brought on by any reduction in follow-up imaging.

Among the 3,159 cases examined, use of dual-energy or spectral analysis potentially affected management in 298 (9.4%) cases. It confirmed suspected observations and increased diagnostic confidence in 455 (14.4%) and provided relevant additional information on an observation in 174 (5.5%) cases, which resulted in characterization of an incidental finding in 44 (1.4%). It was noncontributory in three (0.09%) cases.

Of the 298 cases for the musculoskeletal system, DECT potentially altered management in 266, with the most common use of it being to confirm gout (185/266). While DECT was not noted in 2,272 reports (71.9%), compared with conventional CT alone, DECT findings avoided 162 – 191 recommended follow-up MR examinations, 21 – 28 CT exams, and 2 – 25 ultrasound exams. It did, however, lead to one additional recommended interventional angiography procedure, one ventilation-perfusion scan, and one imaging-guided biopsy.

"The main barriers to implementing dual-energy CT involve technical issues such as image storage and post-processing, as well as more time spent reading the additional images," said Wong. "There are ongoing efforts to streamline the technological processes which have made significant improvements. Active communication between radiologists and other physicians regarding dual-energy CT's capabilities and implementation will also facilitate the uptake of this cutting-edge technology."

Vancouver General has since completed implementation of DECT acquisition for all CT exams performed in the ED to help referring clinicians adapt to DECT and gain trust in its added value.

The findings were published in American Journal of Roentgenology.