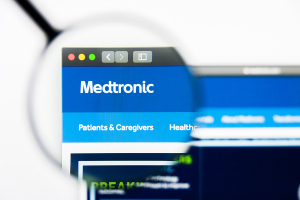 The Justice Department is investigating if Medtronic's past acquisitions influenced competition during the ventilator shortage of the COVID-19 pandemic
The Justice Department has launched an antitrust probe into the dealings of Medtronic under the suspicion that acquisitions carried out by the company limited competition in ventilator manufacturing.

The investigation was established based on complaints made about ventilator shortages during the COVID-19 pandemic, with the Department of Justice issuing Medtronic a civil subpoena formally requesting more information, according to The Wall Street Journal.

“Medtronic is cooperating fully with DOJ’s review of the 2012 Covidien-Newport transaction,” Medtronic spokesman Ben Petok told the WSJ, adding that the deal was appropriately assessed and approved by the FTC.

At the outbreak of COVID-19 in the U.S., fears of ventilator shortages led states and hospitals to scramble for ventilators and other supplies to the point where they engaged in bidding wars with one another for them. The demand exhausted the federal stockpile of ventilators, leading the U.S. government to sign contracts with manufacturers, including Medtronic, to ramp up production.

Medtronic increased production of new ventilators to meet rising demand during the pandemic, and even struck up a partnership to produce units at a Foxconn Technology Group plant in Wisconsin. It also published design specifications for one of its ventilators for others to use and help increase global production. This led to sales of its ventilators more than doubling the quarter that ended in late July, to meet higher global demand.

The shortage in devices, however, have led critics to blame the company’s consolidation and the failure of federal antitrust enforcers to protect competition. Much of this criticism falls on Medtronic’s acquisition of Covidien in 2015 for roughly $50 billion. Covidien, a ventilator manufacturer, had previously acquired another ventilator company, Newport Medical Instruments in 2012 for $108 million.

Newport had a contract with the federal government from 2010 in which it agreed to develop and supply low-cost ventilators. The project was halted following its acquisition by Covidien, with both sides eventually agreeing to end the contract before any ventilators were delivered.

Medtronic’s acquisition brought Newport under its ownership and it still markets Newport ventilators today. It claims that Covidien, upon purchasing Newport, found gaps between what it promised the government and its capability to deliver in terms of the cost, features and performance of ventilators that the government was seeking, the Wall Street Journal reported.

“Covidien’s purchase of a potentially market-disrupting competitor that threatened to drive prices down has all the hallmarks of a killer acquisition, where an incumbent firm acquires and then shuts down a key rival,” the lawmakers said.

An FTC spokeswoman told the WSJ that the commission responded to the congressional inquiry but declined to provide details of the response.