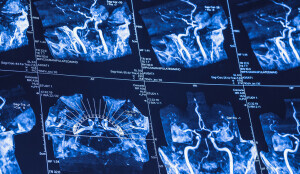 The findings were documented in a new study of patients who presented symptoms of stroke and other neurological disorders. It is the first known attempt to deploy a mobile, bedside MR brain-imaging device, which promises to provide immediate diagnoses to doctors in virtually any setting with a standard electrical supply.

“The fundamental thing is that when you have a strong magnet it has to be used in a secure bunker,” Kevin Sheth, professor of neurology and neurosurgery at Yale and co-corresponding author of the study, said in a statement. “But a weak magnet you can take anywhere safely.”

The portable system showed evidence of ischemic stroke, hemorrhagic stroke, subarachnoid hemorrhage, traumatic brain injury, and brain tumors in patients who showed signs of neurological symptoms. It also was used to analyze 20 patients with severe COVID-19 symptoms, many of whom were too sick to be moved to an MR suite for a neurological diagnosis. Eight were found to have neurological abnormalities.

Developed in collaboration between Yale and medical device manufacturer Hyperfine, the solution is designed to assist clinicians outside major metropolitan areas who require rapid diagnostic imaging, especially for strokes. The solution can be used in poor countries, rural areas, or even ambulances to distinguish stroke symptoms caused by a brain bleed or blood clot, an important differentiation to make for determining the right course of treatment.

“Brain imaging is key to acute care neurology and is a critical determinant of making the correct diagnosis and identifying the optimal treatment option,” said Sheth.

The findings were published in the journal, JAMA Neurology.