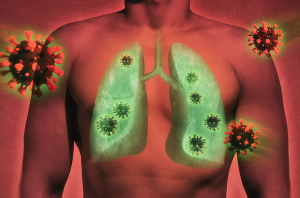 New research published in the American Journal of Roentgenology shows that the use of a lung ultrasound (US) on patients with COVID-19 has resulted in the identification of B-lines, pulmonary consolidation, and a thickened pleural line.

The researchers say that similar to what has been observed with chest CT, this study shows that pulmonary consolidation depicted on lung US may serve as an alert in patient management. However, they also note that similar to other US techniques, lung US is operator-dependent and may not be as effective in inexperienced hands.

Meanwhile, Italian researchers are also making headway using intelligent lung US to assist in diagnosing patients with COVID-19, which they discovered can detect the disease faster than a traditional swab test to improve intake and triage at hospitals.

“A hospital often has dozens of ultrasound machines. In contrast to the current swab test, for which the results may take up to 24 hours, ultrasounds take only a few minutes,” said study author Ruud van Sloun, whose research was published in the April issue of IEEE Transactions on Medical Imaging. “As a result, you might be able to examine five or more patients per hour with one machine. We’re very optimistic regarding its quick application in hospitals and emergency rooms.”

Still, he says further research is needed to determine with absolute certainty whether the lung deficiency is caused by COVID-19 or another lung disease such as severe pneumonia.

Dr. Robert L. Bard, NYC imaging specialist is also working with international researchers to identify respiratory disorders that may be associated with COVID-19 and have found that ultrasound probes can study the lungs between the ribs to read the lung surface where most of the novel coronavirus pathology is situated. Healthcare workers in Spain and Italy are using portable units that feature the benefit of containment within a sterile sleeve, which prevents accidental viral spread to imaging equipment.