At the 2019 Radiological Society of North America (RSNA) annual meeting, Varex introduced liquid metal bearing technology to its X-ray tube portfolio including its FP-1596-LMB tube for cardiovascular applications and its G-507X-LMB for CT applications. For the first time, Varex offers a lease option on these new tubes.

Also at the 2019 RSNA meeting, Dunlee announced plans to launch a liquid metal bearing tube in the replacement space.

Alexander Eitel
“Currently, all dealers and customers have no choice but to buy from the OEM, because today there are no alternatives for liquid bearing technology in the market,” said Alexander Eitel, head of marketing and business development at Dunlee. “By bringing the product to the market, we are giving them a choice to manage their cost and it means they don’t have to be as dependent on the OEM.”

The case for conventional tubes
Despite its revolutionary cooling benefits, liquid metal bearing technology does come with a few drawbacks — cost being the main one.

Replacing one of these tubes can cost between a third or half of the cost of the original CT scanner, according to Jerald Olsen, vice president of sales and business development at Richardson Healthcare. Because of that, a service contract with the OEM is needed to mitigate that risk.

“A liquid metal bearing requires a special drive motor for the anode and these need to be incorporated into the design of the CT scanner,” he added. The torque required to start the bearing in rotation is high, and up-to-speed time is not as fast as a conventional ball bearing.”

These tubes tend to last longer than conventional ball bearing tubes, but in general, CT tube life varies greatly. A tube in similar scanners can last anywhere from two months to two years, according to Launders. 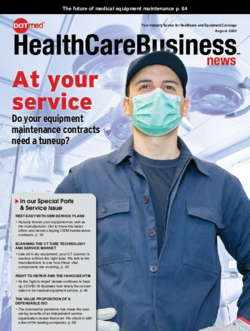