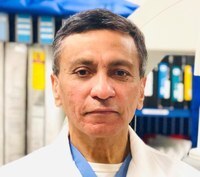 Prior to joining UofL, Contractor was a professor of Radiology at Rutgers New Jersey Medical School.

Contractor is a 1992 graduate of Grant Medical College in Bombay, India. He completed residencies in internal medicine at Coney Island Hospital in Brooklyn, N.Y., and diagnostic radiology at the University of Medicine and Dentistry of New Jersey, Newark. He completed a fellowship in vascular and interventional radiology at New York University Medical Center in New York. Contractor is a founding member of the Society of Interventional Oncology and a Fellow of the Society of Interventional Radiology.

Contractor was named among “New Jersey Top Doctors, The Very Best Physicians, Experts in Their Field” and received the “Golden Apple Award” as a subspecialty teacher at Rutgers New Jersey Medical School in 2015. He received a Certificate of Leadership Mastery at the Radiology Leadership Institute, American College of Radiology, in 2016 and completed MBA Essentials at the London School of Economics in 2018.

“Dr. Contractor’s talent, skills and energy will be a good fit for leading the department into the future,” said Toni Ganzel, M.D., M.B.A., dean of the School of Medicine. “I know he will build on the department’s many strengths and will seek new opportunities in this changing clinical environment.”

Contractor’s appointment as chair of the Department of Radiology was effective June 1.