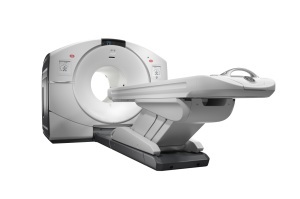 The second generation of the five-ring scanner has added MotionFree technology, which prevents blurring in images due to respiratory motion.

GE Healthcare, which also offers a series of cyclotrons, has an agreement to distribute a tracer called 18F Flurpiridaz that, once it’s cleared by the FDA, will enable scans that can measure both perfusion of heart and blood flow.

“When 18F Flurpiridaz is approved, I think there will be an increase in perfusion scans using PET,” Hermony said. 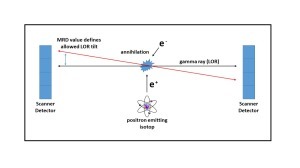 The upgrade doesn’t change the gantry’s hardware, but can enhance the software to allow the system to stay up to date with the current market, said Thomas Kühl, president of MiE — Gamma Camera and PET systems.

“The majority of MiE customers opted to purchase the SCINTRON due to the ability to perform robust 3D MPI (myocardial perfusion imaging) with a PET ECAT scanner,” Kühl said. “There have been multiple requests from cardiologists, using the ECAT series with SCINTRON, to have the option to perform simultaneous PET 3D myocardial blood flow (MBF) and 3D MPI using Rb-82.”

The dosing of Rb-82 can result in deadtime issues during the early MBF phase of the ECAT PET scanner family, Kühl said. A current solution is a 2D/3D acquisition protocol that retracts the 2D septa after the MBF phase and acquires the MPI in 3D mode. That motion can take up to 60 seconds between the two acquisitions. This is not ideal due to Rb-82’s short half-life, and can result in diminished image quality of perfusion imaging in some patients unless dose is increased.
1
2
3(current)
4
5
6
7
8

Read more stories from the May 2020 issue