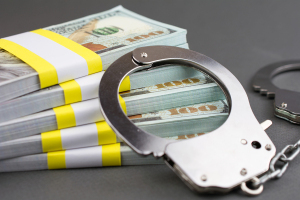 Christopher Parris, 39, of Atlanta, appeared in federal court today, after being arrested on April 10, for allegations that he made and caused the making of a series of fraudulent misrepresentations involving the sale of 125 million respirator masks and other personal protective equipment (PPE) that he knowingly did not have to the VA in exchange for large upfront payments.

“As this case demonstrates, even beyond the typical costs associated with unlawful behavior, COVID-19 scams divert government time and resources and risk preventing front-line responders and consumers from obtaining the equipment they need to combat this pandemic,” said Attorney General William Barr in a statement. “The Department of Justice will not tolerate this conduct, especially when it involves this kind of egregious attempt to target and defraud our nation’s treasures — our veterans.”

The complaint alleges that Parris promised the VA he could obtain genuine 3M masks from domestic factories even though he knew such orders could not be completed. The total value for the equipment altogether was more than $750 million.

He also is accused of making similar false representations in an attempt to sell PPE to state governments. Chief United States Magistrate Judge Alan J. Baverman in the United States District Court for the Northern District of Georgia ordered that Parris be detained.

The onset of the COVID-19 outbreak has forced states and providers to engage in a series of bidding wars with one another for equipment such as respirators, face masks and other PPE, often paying exorbitant amounts. New York, for instance, went so far as to pay more than $248,000 for a portable X-ray machine that typically costs between $30,000 and $80,000, and is estimated to have spent 15 times the regular price in general for medical equipment and supplies.

Scammers have used this predicament as an opportunity to attempt to sell nonexistent or insufficiently effective equipment, as well as effective stock, at outrageous prices. 3M, for instance, recently encountered another alleged scam regarding one of its products, in which it accused Performance Supply LLC, a New Jersey-based company, of offering to sell $45 million worth of N95 respirators to New York City officials at prices 500-600% over those listed by 3M. It also says the company falsely claimed to have a business affiliation with 3M.

“3M does not — and will not — tolerate price gouging, fraud, deception, or other activities that unlawfully exploit the demand for critical 3M products during a pandemic,” said Denise Rutherford, senior vice president of corporate affairs for the company in a statement. “3M will not stop here. We continue to work with federal and state law enforcement authorities, and around the world, to investigate and track down those who are illegally taking advantage of this situation for their own gain.”

Parris is due to be extradited to the District of Columbia to stand trial. He faces a maximum of 20 years in prison and a $250,000 fine, if convicted.