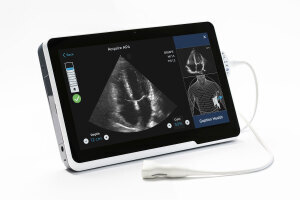 The U.S. Food and Drug Administration has given a marketing green light to Caption Health for its Caption Guidance software – which works with compatible diagnostic ultrasound systems, and which uses AI to help with image capture.

“Today’s marketing authorization enables medical professionals who may not be experts in ultrasonography, such as a registered nurse in a family care clinic or others, to use this tool. This is especially important because it demonstrates the potential for artificial intelligence and machine learning technologies to increase access to safe and effective cardiac diagnostics that can be lifesaving for patients,” Robert Ochs, Ph.D., deputy director of the Office of In Vitro Diagnostics and Radiological Health in the FDA’s Center for Devices and Radiological Health said in an agency statement.

Caption Guidance is the first approved software that can “guide” practitioners through the cardiac ultrasound image capture.

"No patient should have to forgo a potentially lifesaving cardiac ultrasound," Andy Page, chief executive officer of Caption Health, said in a statement. "Through the power of artificial intelligence, Caption Guidance will provide patients with unprecedented access to ultrasound when and where they need it most."

The software was developed using machine learning to train it to differentiate between acceptable and unacceptable image quality, according to the agency — and gives real-time feedback to users that lets them get good quality images.

Caption Guidance software can be used with the Teratech Corporation ultrasound system, also FDA-approved, and could eventually be used with systems from other makers down the road.

"We founded Caption Health to tackle, head-on, some of the most challenging, intractable problems in medicine," said Charles Cadieu, co-founder and president, in the company release. "This FDA authorization confirms our unique ability to couple breakthrough technology with robust clinical validation. And we're just getting started."

Agency approval was based on a pair of studies. In one, trained sonographers did the scanning with and without the AI software assist. In the other, registered nurses used the software to help them capture images, which were then reviewed by five cardiologists, who found that those images were also of diagnostic quality.

The agency performed its review through the De Novo premarket review pathway, used for low- to moderate-risk devices — and is establishing a new regulatory classification for it, which will allow similar devices to go through the 510(k) premarket process.

"Point-of-care ultrasound has been demonstrated to expedite time to diagnosis, reduce the need for more costly testing, and decrease complications from invasive procedures," said Dr. John Bailitz, System Point of Care Ultrasound Education Director, Northwestern Medicine. "Caption Guidance can unlock these benefits by addressing one of the largest barriers to ultrasound adoption: the ability to acquire diagnostic-quality images quickly."

The just-approved software will become a part of Caption Health's software suite — paired with the company's automated ejection fraction interpretation capability — and will be offered to the market as Caption AI.