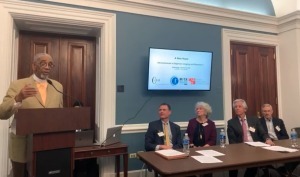 Congresssman Bobby Rush (IL) addresses the room
Alzheimer's researchers and patient advocates gathered on Capitol Hill Wednesday to support passage of a law that they say would increase access to molecular imaging used to diagnose and gauge progression of the disease.

The Medicare Diagnostic Radiopharmaceutical Payment Equity Act of 2019, also known as H.R. 3772, would address the way the scans are packaged for Medicare reimbursement in outpatient facilities, which currently limits patient access to the scans.


The briefing, hosted by the Medical Imaging & Technology Alliance (MITA), along with the Council on Radionuclides and Radiopharmaceuticals Inc. (CORAR), and the Society of Nuclear Medicine & Molecular Imaging (SNMMI), gathered together a variety of speakers to discuss the importance of access to amyloid PET imaging for diagnosing, researching and treating Alzheimer's.

Geri Taylor, a healthcare executive with Alzheimer's who, along with her husband Jim, advocates for increased participation in Alzheimer's clinical trials, spoke about participating in a clinical trial for the drug Biogen after a confirmed diagnosis with an amyloid PET scan.

"When the PET results were positive, I knew definitively I had Alzheimer's," Taylor said. "The daily uncertainty of my life was resolved. Only individuals with positive PET scans were admitted to clinical trials. Before, they were admitted only based on symptoms. We now know the results of older trials were corrupted by participants who didn't actually have the disease."