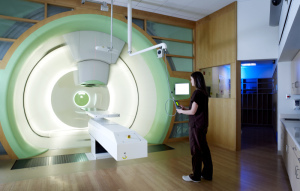 Using specifically designed tools of their own, the team generated the dosage required to theoretically treat patients with an entire course of radiation in less than one second. They observed in tumors the same effect produced by traditional photon radiation, with healthy tissue spared due to the shorter length of time in exposure.

"This is the first time anyone has published findings that demonstrate the feasibility of using protons — rather than electrons — to generate FLASH doses, with an accelerator currently used for clinical treatments," study co-senior author Dr. James M. Metz, director of the Roberts Proton Therapy Center at the Abramson Cancer Center, and chair of radiation oncology at the Perelman School of Medicine at UPenn, said in a statement.

An experimental technique, the concept of FLASH is to deliver large doses of radiation in a fraction of a second in either a single or multiple sessions. The speed of the dose is expected to help it irradiate tumors while sparing healthy surrounding tissue, and in the process, lower entire treatment time from the typical seven weeks to less than a second. Advocates of the practice say such benefits may ultimately lead to greater access to cancer treatment at lower costs.

Previous experiments using FLASH therapy in clinical settings have been performed at similar doses, but with electrons, which do not penetrate deep enough into the body to clinically treat internal tumors. Conventional photons also do not help, due to available treatment systems lacking the ability to generate necessary dosage for FLASH.

Using protons has been a challenge, due to standard detectors quickly becoming saturated from the high levels of radiation required. To overcome this limitation, Penn Medicine specifically developed tools to effectively and accurately measure radiation doses, with the scientists performing the experiment in a dedicated research room of the Roberts Proton Therapy Center. The room allows for photon and proton radiation procedures to be performed side-by-side and just a few feet away from the clinic.

"We've been able to develop specialized systems in the research room to generate FLASH doses, demonstrate that we can control the proton beam, and perform a large number of experiments to help us understand the implications of FLASH radiation that we simply could not have done with a more traditional research setup," said Metz.

The study demonstrates that technical modifications to currently available proton accelerators in clinical settings can produce doses required for FLASH to irradiate tumors with the same effects as conventional radiotherapy, but while sparing healthy tissue surrounding the masses.

The team is currently working out next steps for shifting proton FLASH therapy from the research room to a clinical setting, and designing a delivery system for FLASH in humans.

The findings were published in the International Journal of Radiation Oncology, Biology, and Physics.