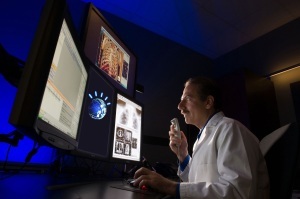 Dr. Eliot Siegel says he hopes to see local
worklists in the next five years that will enable
radiologists to share images and reports with
clinicians in outside networks.
From the November 2019 issue of HealthCare Business News magazine

Dr. Eliot Siegel is surprised. More than 25 years ago, the Maryland-based radiologist could envision sharing images with not just other departments in his own network but with ones outside of it, in networks belonging to different providers and across vast geographies. He expected it to be the norm.

Online access to imaging exams have also led to more patients seeking direct meetings with their diagnosing radiologist, shifting the traditional role of the radiologist from someone who just reads images to one who is responsible for both reading and relaying findings. The extension of this role comes with the need to understand what should and should not be told to the patient, and how best to relay information.
1(current)
2
3
4
5