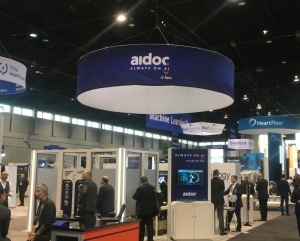 Aidoc at RSNA 2018
Aidoc has released an artificial intelligence (AI) solution to identify and triage stroke in CT scans, and cut time until treatment.

The solution, which is CE marked, has an algorithm that flags vascular occlusions that result in both ischemic and hemorrhagic strokes and prioritizes the emergency cases in the radiologist’s workflow.

Aidoc products, which include solutions for flagging pulmonary embolism and cervical spine fractures are installed at more 300 medical centers worldwide.

Cedars-Sinai Medical Center in Los Angeles conducted a study last year of the Aidoc brain package and found that using it decreased report turnaround time by more than 60 percent and also increased the radiologist’s confidence in their findings.