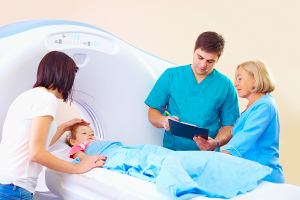 Comprising more than 4,000 children, the prospective inquiry is part of a larger, ongoing study to develop a CSI risk assessment tool for determining when children require imaging.

"Clinical screening involves conducting a careful history regarding the injury event and physical exam to determine whether or not a child is a risk for CSI and thus warrants testing for it. This practice is highly variable," said senior author Julie Leonard, emergency medicine physician at Nationwide Children's Hospital and principal investigator in the Abigail Wexner Research Institute at Nationwide Children's, told HCB News. "A tool would help guide decision-making by reminding clinicians of key history and physical exam findings AND appropriate clinical actions to take based on the presence of given risk factors."

Injury is the leading cause of morbidity and mortality in children. An estimated eight million suffer blunt trauma annually, a fact which has caused CSI testing to rise by 400 percent in the past two decades. Imaging such patients was traditionally done with X-rays, but is now performed with CT, exposing them to far more radiation. Providers, however, say CT is necessary, as children are difficult to evaluate due to not having identifiable CSI risk factors.

Conducted on 4,091 participants at four children’s hospitals, the study identified 74 subjects with CSIs, along with 14 factors that have bivariable associations with CSIs. Researchers found seven of these useful in distinguishing CSI and non-CSI patients. They include:
• injury acquired while diving
• axial load, from landing on the top of the head or other blunt force directly in line with the spine
• any self-reported neck pain
• reported inability to move neck
• altered mental status on examination in the emergency department
• intubation due to airway injury, respiratory failure or inability to protect their airway, or respiratory distress

The researchers are currently in the first year of a five-year national study composed of observational data on more than 13,000 children from emergency department and emergency medical services providers. The premise of the project involves evaluating clinical observations from EMS, ED and surgery providers for the children, who have experienced blunt trauma, and then following up with the children a month later to determine if they have CSIs.

They expect to increase the sensitivity, specificity and confidence factor of their mathematical model with further research that will eventually lead to the development of a pediatric CSI risk assessment tool that can be used in any setting for children with traumatic injuries.

"This allows us to determine which risk factors (history and physical exam findings) are important to predicting CSI in children (mathematical modeling of CSI risk). We are also conducting 'user centered design' activities with trauma care providers in diverse practice settings throughout the country to determine the interface/attributes of the tool," said Leonard. "As an example, the mathematical model or algorithm could be implemented as a calculator or an electronic feature built into the medical record or the tool could be a simple pocket card checklist or wall chart reminding clinicians of the process of evaluating children for potential CSI (clinical clearance guideline)."

The findings were published in Pediatrics.