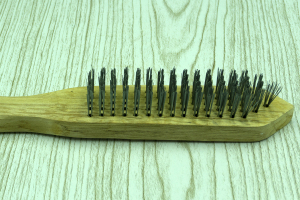 In the halcyon days of summer sharp-eyed radiologists have another thing to look out for on their X-rays – loose wires from metal grill brushes that can lodge in the throat of unsuspecting barbecuers.

The tip comes courtesy of Michigan Medicine’s Department of Otolaryngology, where doctors safely removed a wire grill-brush bristle from the throat of patient Linda Pelham – in some measure thanks to her persistence.

“I was glad that Linda kept seeking answers to her problem,” said Dr. Mark Prince, chair of the department. “Wire bristles from barbecue cleaning brushes are often very difficult to identify visually or by radiology exams, often resulting in the need for multiple examinations until someone sorts out what is happening – I’m proud of Linda for being persistent about her care.”

The bristle was half-an-inch long.

"When we found out that there was a wire in my throat, my husband swiped a magnet over our grill and picked up an additional 30-40 wire bristles, previously unseen by the naked eye – it was alarming," Pelham told Michigan Health.

The wire had been grilled onto a seared hot dog and Pelham took a single bite and suddenly felt a searing pain in her throat and had trouble breathing or talking.

Despite her husband's quick application of the Heimlich maneuver, which allowed her to breath normally, the pain remained, so they went to the local ER, where a scope of her throat was unrevealing.

A CT scan was scheduled, but the pain returned before the appointment and Pelham went to an urgent care facility where she got a steroid shot and an X-ray, which revealed the wire in her throat.

When she went for her CT scan, she was referred directly to an otolaryngologist. After she was scoped again, surgery was scheduled, but nothing was found from the procedure.

She continued to get steroid shots and was ultimately sent to the Michigan Medicine Department of Otolaryngology, where Brain Kilbarger, a physician assistant, saw her, and got more X-rays, which confirmed the wire in her throat, He consulted with Prince, who met with Pelham. Subsequent X-rays showed that to make matters worse, the bristle was moving around in her throat.

A procedure was set up and Prince and his OR team succeeded in safely removing the bristle from her throat.

“I can’t stress how important it is to use brushes with plastic or other non-metal bristles when cleaning your grill,” advised Pelham, in recounting her ordeal.
1(current)
2