A look back at the remarkable career of Ed Sloan Sr. 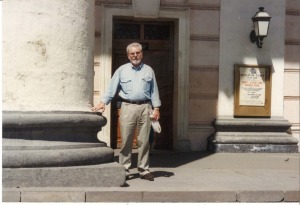 Ed standing outside of an
imaging center in Russia, where
he was a joint venture partner.
From the August 2019 issue of HealthCare Business News magazine

In the early 90s Ed Sloan found himself sitting in the waiting room at a medical facility in Spokane, Washington with some time to kill. He had flown into town on a 5 a.m. flight out of Dallas, where he had spent the night after departing his home in Tennessee the day before.

He wasn’t there to see a doctor. He was there to see a very unhappy equipment service administrator. Ed’s company had provided an I/O circuit board that failed the previous day and the CT9800 CT scanner was useless until a replacement arrived. The administrator made it clear over the phone that this was unacceptable.

If you saw him sitting there, red-eyed for lack of sleep and without any immediate solution to repair the problem, you might ask yourself why he even bothered to take the trip. The answer to that question provides an insightful glimpse into Ed Sloan’s business philosophy.

Full disclosure, Ed and I are friends. You could probably fill Madison Square Garden with all of the people who are friends with Ed Sloan. He has helped me and other people and although I have never written a story like this in the past, it seems appropriate to me that I do so now. 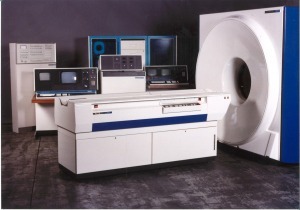 A GE CT8800 CT scanner from the 1980s.
When it comes to independent parts and service in the medical equipment industry, there is perhaps no individual who has impacted the business more profoundly than Ed. Even if his name is not familiar to you, there are probably six degrees of separation between him and the equipment maintenance team at your facility.

Ed’s remarkable story is composed of a unique mixture of business intelligence, concern for individuals and being at the right place at the right time.

Sloan Enterprises
After graduating from high school and attending Tennessee Tech and Middle Tennessee State College, Ed enlisted in the Marine Corps in 1959. He was stationed at the Marine Barracks NSA as a legal aid in Fort Meade, Maryland and was there for four years.

After leaving the Marines, he went to work driving trucks for a common carrier. A decade later, Ed started spending his off time working for the family's real estate business part-time, but he remained a truck driver for almost 25 years.
1(current)
2
3
4
5
6
7
8
9
10
11