Another feature of the 800 series is SwiftScan Planar and SwiftScan SPECT technologies, with increased sensitivity that Hermony said allows for 25 percent faster imaging.

On the PET side, GE Healthcare has also developed a technology to eliminate blurring created by respiration. Called MotionFree, the technology will negate the use of specific devices to correct motion by using an advanced algorithm, said Sergio Calvo, general manager for PET at GE Healthcare.

“It makes a huge difference to enable motion elimination in critical areas of the body,” Calvo said. 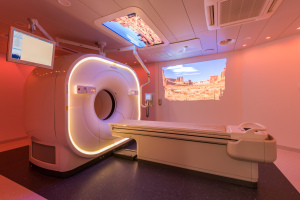 Philips Vereos PET/CT Ambient Experience
Philips
Philips is continuing to build on the foundation of its Vereos, the digital PET/CT system it began shipping at the end of 2017.

In February, the company announced the launch of IntelliSpace Portal 11, the latest release of its comprehensive, advanced visualization and quantification software.

Mark Olszewski, global marketing leader for CT and advanced molecular imaging at Philips, said the company plans to share more results from its work with clinical partners in the oncology, neurology, and cardiac spaces; next steps in advanced image reconstruction; and pairing the Vereos with the company’s PerformanceBridge data analytics platform at the SNMMI annual meeting this month in Anaheim, California.

“We’re using adaptive intelligence to help our customers increase the speed and precision of their diagnoses,” Olszewski said. 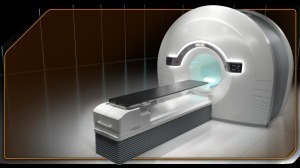