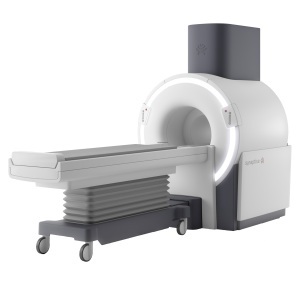 Collaborating with the Nova Scotia Halifax Authority, Synaptive will utilize Evry, designed for patients who require immediate attention, in a four-year study that aims to assess the role of MR in emergency departments, ICUs and other sites that were previously unable to install MR systems.

“Throughout the world, CTs have become routinely used in the emergency department for patients with symptoms of neurological deficit, largely due to being less expensive than conventional MRs and having shorter imaging times,” Cameron Piron, president and chief strategy officer for Synaptive, told HCB News. “MR, however, is superior to CT for neuroimaging, and is the preferred imaging modality for identifying the majority of neurological conditions including stroke, cancer, trauma, and dementia. But over the last 20 years, MRs have become very large, complex and expensive medical devices.”

Designed in a smaller and lighter size than conventional MR scanners, Evry can be easily installed anywhere in a hospital environment. It also is cryogen-free, removing the need for the required quench pipe found in a majority of machines with superconducting magnets, and offers automated and optimized user interface for improved workflow.

Such innovations help reduce the cost of construction for the installation of Evry, as well as annual service costs that are associated with standard superconducting magnets. In addition, users can quench the magnet in emergencies and turn on and off the magnetic field of the system in about 15 minutes as an extra safety precaution against issues that may occur, such as launch of projectiles.

Each stage of the study is linked to specific hypotheses and associated outcomes regarding the optimization of image acquisition, such as speed for ED patient care, comparisons of Evry’s diagnostic sensitivity and specificity to those of the current standard of care, and assessments of how scan performance affects therapeutic decisions.

“One research area of specific interest is the use of Evry in stroke triage. There has been data presented previously by Johns Hopkins in Academic Emergency Medicine, showing decreased admission rates when MR was made available to the emergency patients 24 hours a day, seven days a week,” said Piron. “There is also recent evidence demonstrating efficacy of intra-arterial interventions for patients who are between six and 24 hours post-stroke. The trial investigators noted the critical use of MR in selecting patients who would benefit from this intervention. This trial is, first and foremost, game-changing for these patients, with a 35 percent increase in numbers of patients having a good outcome, but is also game changing, as it defines a demonstrated role for the impact of MR on therapeutic management in the ED.”

The machine will be located at QEII’s Biomedical Translational Imaging Centre (BIOTIC), with installation expected to be complete by fall 2019.