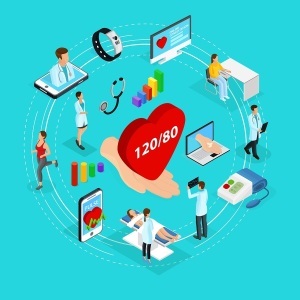 The automobile has been credited for entirely changing the face of American society in the 20th century.

Once personal transportation became affordable, especially in the post-World War II era, we became much more mobile as a country — which meant the old limitations of time and distance were no longer an obstacle to work or play.

Yet imagine if, after purchasing all of those vehicles, Americans had simply let them sit in the garage or the driveway. The impact of all those automobiles would have been negligible.

We are at a similar, century-defining moment of mobility right now with patient-generated health data and remote patient monitoring (RPM). Healthcare has always been viewed as a service patients passively receive — usually in a designated, clinical setting. That is now changing.

Virtually everyone in America either owns a device that can monitor and share various aspects of their health or knows someone who does. In fact, it has been estimated that by 2020, 40 percent of Internet of Things (IoT) devices will have healthcare applications.

While getting all those devices into the marketplace is important, it’s only half the battle. Maybe even the lesser half. The real value comes when all those devices start automatically feeding that data into systems that can help us generate better population health outcomes through the use of machine learning, neural networks and artificial intelligence (AI) platforms.

Achieving that level of participation is often easier said than done. Just ask anyone who has tried to get audience responses during a business presentation, or has even tried to get friends to sing or clap along at a campfire.

To help patients take to remote engagement the way Americans once took to driving cars, the best approach is to use purpose-driven outreach in the least intrusive way possible. By making it easier for patients to connect directly to their care teams from remote locations, care teams can receive real-time streams of health data that will help them manage both individuals and entire populations more effectively.

Here are some tips to get started on the pathway to remote patient monitoring and connected care.

Keep it simple
If you try to take on too much, or try to solve too many issues at once, you are likely to fail at all of them. Most initial remote care pilot programs aim for core goals, such as reducing length of stay or improving outcomes for one chronic condition such as heart failure, where the outcomes are quickly clear. Once you have established that RPM works within your organization you can begin extending it to other conditions such as COPD, hypertension or diabetes. Or you can incorporate it into existing treatment programs such as smoking cessation. Before you know it, you’ll have a robust RPM program.
1(current)
2
3

The latest in patient monitoring technology