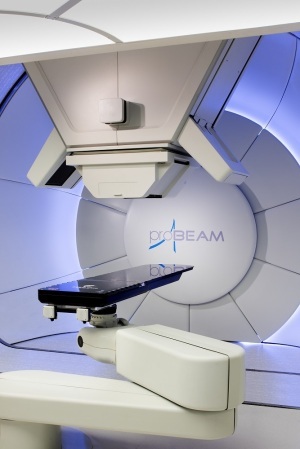 Varian used its ProBeam system
to conduct pre-clinical research on
Flash therapy
Varian and the University of Maryland School of Medicine’s Department of Radiation-Oncology have unveiled the first quantitative, preclinical findings of their joint research into the use of Flash therapy, which delivers high doses of protons at ultra-high speeds in less than one second, reducing time and exposure to radiation during procedures.

The two discussed the results of their analysis this month at the American Association for Cancer Research (AACR) Annual Meeting in Atlanta, saying that reduced toxicity was observed within healthy tissues and organs of specimens that underwent the ultra-high dose rate proton cancer treatment.

“Flash therapy preclinical research has been shown to be effective in controlling tumors and lowering toxicity when delivered in an ultra-high dose rate and in one to three treatments,” Dr. Deepak Khuntia, chief medical officer for Varian, told HCB News. “Compared to proton treatments, which are typically prescribed for 25 to 30 treatment sessions, Flash would significantly lower the number of sessions for each patient and help to bring down the cost of the entire course of treatment. Furthermore, there may also be opportunities in decreasing the treatment time given; beam on-time could change from a few minutes to seconds.”

Such efficiencies would give way to the ability to treat more patients in a single room, although the main focus is its impact on tissue and organs.

Dating back to 2016, the study found “dramatic” reductions in the impact of radiation on lung fibrosis and dermatitis in mice subjected to Flash. The trial split 392 mice of the same age and gender into three groups, with the Flash group receiving a dose of 17.5 Gy at an ultra-high dose rate of 40 Gy/sec with Varian’s ProBeam Proton Therapy System. The researchers recorded 25-30 percent less damage to lung tissue, leading to less fibrosis of the lung, and an average 35 percent decrease in skin dermatitis.

In addition, no serious or extreme dermatitis was found in these mice, compared to the group that underwent conventional proton therapy at a dose of 17.5 Gy at a dose rate of 1 Gy/sec, and the control group, which did not receive any form of treatment.

Khuntia, however, cautions that it is still too early to determine the complete value of Flash therapy on cancer care, as well as on its associated costs. He says that while it is not yet clear when clinical human trials will take place, further examinations will be orchestrated with the University of Maryland and other members of the FlashForward Consortium, a group designed by Varian for researching potential uses of the treatment.

“We continue to pursue a number of studies with multiple members of the FlashForward Consortium, and will publish the results as they become available,” he said. “We have seen very promising results thus far.”

The findings are in an abstract presented at the AACR Annual Meeting.