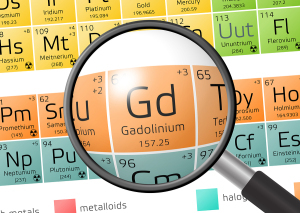 A German study concluded that follow-up images generated without gadolinium-based contrast agents on a 3T MR scanner enhanced with longitude subtraction mapping is just as sensitive in diagnosing multiple sclerosis (MS) lesions as with gadolinium. The study was recently published online in the journal Radiology.

Gadolinium has come under scrutiny in the past several years after studies found that the agent can be retained in the body and may pose health risks. Longitudinal subtraction mapping uses two anatomical MR images from different time points and calculates a map that directly depicts the changes between the two images.

The German study included 507 follow-up images in 359 patients with MS. The research team found that of 507 follow-up images, 264 showed interval progression, with a total of 1,992 new or enlarged, and 207 contrast-enhancing lesions. Four of these lesions (on three MR images) were retrospectively detected on only gadolinium-free images.

The study concluded that at 3 Tesla, the use of a gadolinium-based contrast agent at follow-up MR did not change the diagnosis of interval disease progression in patients with multiple sclerosis. Based on their analysis with the gadolinium-free scans, TUM decided in 2017 to omit contrast agent in MS follow-up scans. The study team believes other MS programs should also consider the protocol.