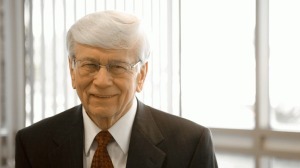 A longtime radiologist at Loma Linda University Medical Center in California, Slater is credited with overseeing the creation of the world’s first proton treatment center, the LLUMC Proton Treatment Center, in 1990.

Born in 1929 in Salt Lake City, Utah, the young doctor-to-be grew up fascinated by the world of science, a passion which led him to pursue and graduate with a bachelor’s degree in physics in 1955 from the University of Utah.

Initially working as a California junior high school math teacher, Slater soon decided to combine his love for physics with medicine and applied to Loma Linda University School of Medicine, which he graduated from in 1963.

He then trained as a resident at LDS Hospital in Utah and White Memorial Medical Center in Los Angeles before moving to Texas to complete a National Institutes of Health Fellowship at the University of Texas MD Anderson Cancer Center. It was here that his interest in heavy-charged particle therapy emerged, leading him to choose radiology as his specialty.

“[It] was a shocking experience to see how ill we made our patients. During treatment they became very, very sick,” he said in a documentary, The Convergence of Disciplines. “Some of them had to stop treatment and recuperate for a week or so before they could come back. This reduced their chance for a cure and caused misery for them as an individual and for their family.”

Returning to Loma Linda University Health in 1970, Slater set to work on advancing the field of radiation medicine, delving into computer-assisted radiotherapy planning for the development of CT-based treatment. His first system was introduced in 1971, earning him a first-place award from the European Association of Radiology in 1975 and an invitation to speak at the U.N. International Atomic Energy Agency in Vienna. He also received the first-place award from the American Society of Therapeutic Radiologists in 1978.

Wanting to find more ways to target and eliminate tumors without damaging surrounding healthy tissue, his attention turned to proton therapy, leading him to request and gain permission, in 1986, from the Loma Linda University and Loma Linda University Medical Center boards of trustees to partner with the Fermi National Accelerator Laboratory (Fermilab) in the planning of the LLUMC Proton Treatment Center.

Constructing the $100 million facility was not without its challenges. The high costs for the project led Slater to testify before a congressional hearing with U.S. Congressman Jerry Lewis to request funds of up to $25 million.
1(current)
2