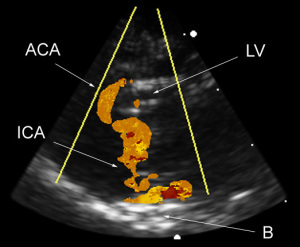 The brain scope is inserted
into a dime-sized hole
in the skull
Biomedical engineers at Duke's Pratt School of Engineering have adapted a three-dimensional ultrasound scanner that might guide minimally invasive brain surgeries and provide better detection of a brain tumor's location.

The "brain scope," which is inserted into a dime-sized hole in the skull, may be particularly useful for the bedside evaluation of critically ill patients when computed tomography (CT) and magnetic resonance imaging (MRI) equipment is unavailable, the researchers said. They report the development in a forthcoming issue of the journal Ultrasound in Medicine & Biology, which is currently available online. The work was supported by the National Institutes of Health.

Brain surgeons now rely primarily on two-dimensional images produced by MRI or ultrasound, said Edward Light, a research and development engineer in the biomedical engineering department at Duke. "The problem is that without 3-D, you could miss something," he said. MRI machines are also expensive and require a dedicated space with special surgical tools that can be used in close proximity to the imagers' powerful magnets.

Last year, the Duke team, led by biomedical engineering Professor Stephen Smith, reported the development of a 3-D ultrasound device designed for imaging the heart and other internal organs during endoscopic surgeries performed through tiny "keyhole" incisions about 3 centimeters in diameter. To make the probe more suitable for brain scanning, the researchers shrunk it even further, to fit through a 10 millimeter hole in the skull.

"The earlier device required a hole bigger than a quarter," Light said. "Now, it's closer to the size of a dime."

The brain imager also required them to shift the orientation of the ultrasound beam with respect to the probe, he said. Rather than capturing a side view, the brain probe "looks" straight ahead by emitting ultrasound waves like water from a hose. That way, it can produce an image of the brain with just the tip inserted through the skull.

The researchers demonstrated that the brain scanner can successfully image the brain of a dog. Guided by the device, team member Srinivasan Mukundan of Duke Medical Center directed a needle into a particular region of the animal's brain, as is required in surgeries to drain cerebrospinal fluid and relieve pressure on the brain. In a second animal, the researchers made use of dyes to enhance ultrasound images of blood vessels in the brain.

The new advance is the latest in a series of developments Smith's team has made since developing the first 3-D ultrasound scanner in 1987 for imaging the heart from outside the body.

"Wherever there is a commercial 2-D niche now, we are working to put a 3-D tool in there," Smith said.