RSNA president's keynote on 'our chosen, beloved field of radiology' 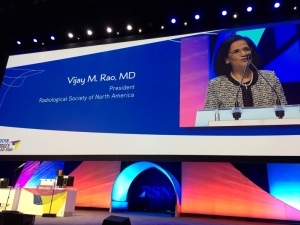 Dr. Vijay Rao at RSNA
The new president of RSNA paid tribute to imaging leaders who passed in the last year. She also used the occasion of her keynote speech to describe the AI imaging future through the eyes of a future radiologist who today is only a year old.

Dr. Vijay M. Rao, RSNA president, and chair, Department of Radiology at Jefferson Health, spoke proudly of the third generation of physicians in her children. She said that perhaps one of her five granddaughters – four of whom were in attendance – might also pursue a medical career. She speculated that if her one-year-old granddaughter should start her radiology training in 2043, she will be practicing a much different standard of medicine than the "dark ages" of imaging in 2018.

“In 2043, radiologists will truly be at the epicenter of patient care,” Rao said. She attributed this prediction to AI, which will replace all the current methods of decision support for vastly improved efficiency and effectiveness. Her granddaughter, she predicted, would have more time because of AI.

For example, Rao believes AI will calculate laborious measurements to rapidly diagnose painful, emergent conditions, such as a stroke. AI will also monitor the report to mine similar findings and suggest a diagnosis. An AI assistant will retrieve medical information from outside the in-house medical record for auto retrieval. All this will drastically reinvent the role of the radiologist as a caregiver.

In short, imaging AI will, Rao said, achieve the long sought-after goal of merging a total patient medical profile through imaging. AI will compile such factors as current images, prior images, lab results, surgical or biopsy findings, history and physical exams, patient demographics, patient risk factors, and even patient genomics, for a holistic insight to the patient.

“[With AI], radiologists [will be] in the best position to provide informed answers to patients,” Rao said.

AI is not to be feared, she stressed, but embraced, as radiologists reinvent themselves. To prepare imaging for an AI future, Rao also informed the group of the roll-out of a new RSNA journal, Radiology: Artificial Intelligence.

Several recognitions were made to open the 2018 session. This included honoring the late William G. Bradley Jr., M.D., Ph.D., an imaging leader in the University of California medical system in San Francisco and San Diego, as well as Alexander R. Margulis, M.D., who escaped the Nazis in World War II to immigrate to America and eventually practice medicine. He was a renowned imaging educator, mentor, and author. Both families were on hand to receive a crystal commemorative bowl in recognition of their loved ones’ long imaging service and as a token of their colleagues’ esteem. David M. Yousem, M.D. received the Outstanding Educator Award and Carolyn C. Meltzer, M.D., FACR the Outstanding Researcher Award.

In her acceptance comments, Dr. Meltzer eloquently referred to the specialty as “our chosen, beloved field of radiology.”