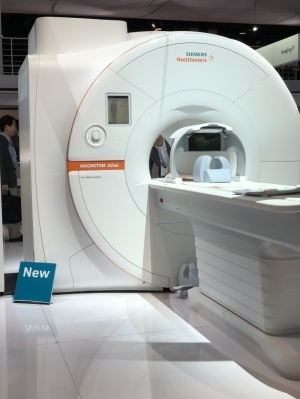 Siemens Altea 1.5 T MR
Siemens Healthineers focused on bringing premium technology to the more price-conscious market with the unveiling of new MR and radiography systems at the 2018 RSNA annual meeting in Chicago.

The company debuted the MAGNETOM Altea, a new wide-bore 1.5T MRI scanner featuring both the company's BioMatrix Technology, which responds to patients’ anatomical differences, and new Turbo Suite applications that can cut scan time by up to 50 percent. The scanner also has the option of a new infotainment system that virtually enlarges the bore.

The Altea was officially unveiled Sunday morning, the opening day of the six-day show. It’s the latest scanner to feature the company’s BioMatrix Technology, which considers patients’ physiological and anatomical differences, providing a more personalized approach to MR scanning and avoiding exam variations.

“This technology we had in our premium MRI portfolio is now really accessible,” Daniel Fischer, head of clinical marketing for MRI at Siemens Healthineers told HCB News after a reveal of the system on the show floor at McCormick Place.

The BioMatrix technology includes what Siemens Healthineers calls the Select&GO Interface, which uses artificial intelligence (AI) to increase productivity by removing the need for anatomical landmarking and allowing for patients to be positioned more quickly. The company’s Tim 4G and Dot (Day Optimizing Throughput) automation also allows for certain scans to be more easily reproduced.

The 70-centimeter scanner also features the company’s new Turbo Suite acceleration packages, which can speed up routine examinations by up to 50 percent without sacrificing image quality, Fischer said.

Also highlighted during the reveal Sunday was a new, optional in-bore infotainment system called Innovision, which allows patients to watch movies or informational videos – including their own Netflix queue, according to Fischer – with sound projected into the skull bone from a memory foam pillow that has noise cancellation properties.
1(current)
2