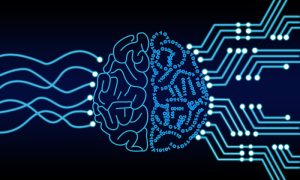 From the November 2018 issue of HealthCare Business News magazine

AI is a little acronym for one of the biggest changes taking place in imaging. Over the last year, it is fair to say that AI has presented as a mix of unprecedented buzz, hyperbole, and finally – something that could actually bring meaningful value to providers.

And although headlines like “Will AI Replace Radiologists?” have not shown any signs of slowing down, industry insiders have taken a firm position that this is really more about augmenting human intelligence than replacing it with something that stands alone and makes decisions.

“We are challenged to communicate a clear message of the continued bright future for radiologists amidst the hype around AI replacing radiologists,” Dr. Geraldine McGinty, chair of the American College of Radiology (ACR) Board of Chancellors told HCB News. “In general, radiologists are innovators by nature, and our community is engaged and ready to use these new tools to improve quality of care and outcomes.”

Indeed, AI and its underlying machine learning will be a key focus at this year’s 2018 RSNA meeting, with expanded learning and research opportunities for stakeholders to sift through the promotional language and see what’s really happening. RSNA’s leadership believe that imaging is now entering its “fourth generation”, characterized by big imaging AI investments that will soon make their presence felt in regular imaging facilities throughout the country.

In June, RSNA even announced the creation of a new journal titled Radiology Artificial Intelligence.

Not that AI doesn’t pose challenges. Dr. Kurt Shoppe, the chair of the ACR Reimbursement Committee, told HCB News in July that there are some details to work out related to radiologist payment policies and who will cover the overhead costs of AI implementations. While those specifics remain somewhat uncertain, Shoppe echoed a sentiment that has become familiar in the industry: that AI would help radiologists reduce time on mundane, repetitive tasks and allow more time to spend with patients and hospital teams.

Dr. Matt Lungren, associate director for artificial intelligence and imaging at Stanford Medical Center, said that one of the biggest challenges with creating powerful AI systems is having the abundance of data required to train the model.

“They’re very hungry for data,” Lungren told HCB News, adding that privacy laws and siloed medical centers can hamper access to those large quantities in imaging where other industries might not run into those challenges, causing a “critical bottleneck in the advancement of the field.”
1(current)
2
3
4
5
6