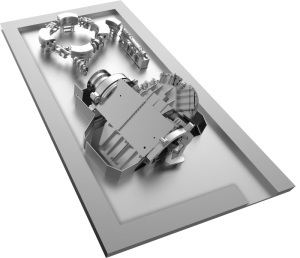 In cancer treatment, time is of the essence. For the best outcomes, precision is also a key component. Whether it be proton therapy or conventional radiation oncology, those goals are at the heart of the new treatment systems and oncology software entering the market.

The rise of proton therapy
Proton therapy has had a slow adoption due to the high price tag, but as evidence accrues for its benefits and insurers begin to take notice, access is coming within reach for more of the patients who stand to benefit most from it.

Hitachi
The company has been moving ahead with installations of its Hitachi Proton Beam system since receiving FDA clearance in 2008.

The system is equipped with a compact synchrotron accelerator, which the company says allows for beam delivery at selected energy levels, with significantly less neutron generation, and is used by facilities including the MD Anderson Cancer Center and Mayo Clinic sites in Minnesota and Arizona.

The company is currently working on an installation at Sibley Memorial Hospital, a member of Johns Hopkins Medicine, in Washington, D.C., and hopes to start treating sometime in late 2019, said Sash Matsumoto, general manager at Hitachi America.

The company also announced late last year that it will install a system at Clinica Universidad de Navarra (CUN) in Madrid, Spain.

Matsumoto noted that the lead time for constructing proton therapy facilities is getting shorter and the overall cost is coming down, though facilities are mainly focusing on one- or two-room centers instead of multiple rooms because of the investment.

“Not every hospital can afford a multi-room proton system,” Matsumoto said. “I think every vendor is doing everything we can to lower the cost and, hopefully, it will allow more hospitals to have the technology. With more clinical trials providing evidence, it’s become more and more clear that for certain tumors proton is the best treatment and it’s something that every patient deserves to have access to.”

IBA
Since the company’s ProteusPLUS treated its first patient in 2001 and its smaller ProteusONE was first used in 2014, IBA has been rapidly deploying its technology. In the last six months, IBA completed four installations of the ProteusONE – which has pencil beam scanning and cone beam CT – around the world.

The company’s goal is to make the system such that it could be used for a wide variety of indications, with the ability to treat complex tumors, including moving ones, using respiratory gating systems and better imaging, said Nicolas Denef, IBA’s product management director.
1(current)
2
3
4
5
6
7
8
9

Cost savings do not justify use of CMS oncology alternative payment model: study