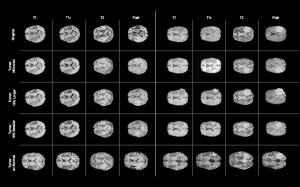 The research paper from scientists at Nvidia, the MGH & BWH Center for Clinical Data Science and the Mayo Clinic was unveiled Sunday at the International Conference On Medical Image Computing & Computer Assisted Intervention in Granada, Spain.

The paper explains how the researchers used generative adversarial networks (GANs) to generate the synthetic images, which are absent information that is tied to a patient.

“We can create abnormal brain MR images to train neural networks for diagnosing disease,” Hoo Chang Shin, a senior research scientist at Nvidia, told HCB News. “To the best of our knowledge, these are the first generated synthetic images.

“This addresses one of the significant challenges of applying deep learning to medical data,” Shin continued. “We usually don’t have enough examples to train AI algorithms. This also addresses the patient privacy issues, as images can be more easily shared outside an institution.”

Radiologists are also excited about using the synthetic images for training new doctors, since there are not enough rare cases for training purposes.

“They were excited that with this technique they can generate examples of new and rare diseases,” Shin said. “Even if large institutions have a lot of data, they can’t have diverse enough data.”

The research paper was not the only recent news released by Nvidia. At GTC Japan last week, the company unveiled the NVIDIA Clara platform, a supercomputer especially designed for AI in medical imaging.

The company said the combination hardware and software platform is a powerful tool to help companies develop algorithms for early detection, diagnosis and treatment of diseases.

The platform includes the NVIDIA Clara AGX, which the company calls “a revolutionary computing architecture based on the NVIDIA Xavier AI computing module and NVIDIA Turing GPUs,” and a software development kit for AI application developers.

The platform’s Clara SDK can allow older imaging systems to use modern technologies, such iterative reconstruction for CT and X-ray and compressed sensing for MR.

The company ImFusion uses the Clara platform to create 3D ultrasound from traditional 2D acquisitions and fuse the ultrasound with CT.

“We specialize in accelerated medical image computing and guided surgery,” said Wolfgang Wein, founder and chief executive officer of ImFusion, in a statement announcing the release of the platform. “NVIDIA’s Clara platform gives us the ability to turn 2D medical images into 3D and deploy our technology virtually.”