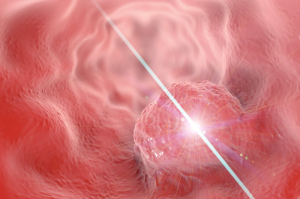 Ablation uses electrical energy at a temperature of up to 140 degrees to burn away tumors in the brain and other sensitive areas. The problem is that the only way for a surgeon to view the procedure is by taking follow-up images after each burst to “cook” the tumor.

This prolongs time on the table for the patient and requires expensive CT, ultrasound or MR imaging to keep track of how the operation is going.

A research team at the University of Southern California (USC) thinks they have a better way to help clinical teams see invasive ablation treatments. Their study will be published in the upcoming issue of IEEE Transactions on Biomedical Engineering.

“We are working to provide a faster, more convenient, and more accurate method of guidance and monitoring for thermal ablation procedures,” John Stang, research assistant at the Ming Hsieh Department of Electrical Engineering at USC told HCB News. “It is also much less expensive and doesn’t require the large space overhead that MR machines require.

The solution harnesses real-time thermal imaging so that surgeons can ensure the correct ablation power is delivered to the tumor site. Instead of relying on MR, ultrasound, or CT images, the OR is fitted with a microwave antenna array.

“Our technology allows the doctors to provide a "closed-loop" treatment to the patients and thereby reduce the procedure time substantially,” Mahta Moghaddam, professor and director of the Microwave Systems, Sensors, and Imaging Lab, holder of the William M. Hogue Professorship in Electrical Engineering at USC, and another member of the research team, told HCB News. “[It] can provide the opportunity for simultaneous monitoring and therefore avoiding over- or undertreatment.”

During the procedure, microwave signals are continuously transmitted into and received out of the treatment area. From these signals and information from a prior imaging study, like an MR, the researchers produced a 3D thermal image of the region in real time to provide doctors a quantitative temperature map of the treatment site.

"In in vitro experimental validation studies, our system was able to achieve one degree Celsius accuracy at a refresh rate of one frame per second," Stang said.

This can improve outcomes for patients. With current ablation protocols, patients sometimes have to return to the OR because not enough tumor was removed, or too much surrounding tissue could be removed, causing side effects and complications. Such collateral damage could, for example, unintentionally rupture a blood vessel.

About 80,000 Americans are diagnosed annually with brain tumors, according to the American Brain Tumor Association.

The technology also has the possibility for the treatment of other sensitive site diseases, such as epilepsy. The researchers believe clinical trials for their microwave ablation imaging could commence in the next three to five years.