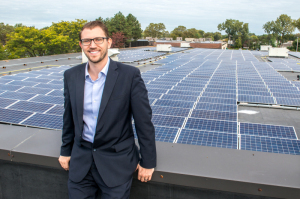 Extreme weather events are becoming more common with the “once in a lifetime” flood or the latest “storm of the century” regularly bucking their labels.

With the increase of weather-related issues comes an increase in health issues, especially for the most vulnerable populations in the country with the poorest communities often being the hardest hit and lacking the funds to move to an area less prone to the increasingly dangerous vagaries of nature. It’s with that backdrop that HealthCare Business News spoke with Mike Waller, director of sustainability for Rochester Regional Health, to find out more about how the organization is taking steps to reduce its own impact on the environment.

Waller joined Rochester Regional in January 2016. He brought his background in engineering with a focus on renewable energy, having previously worked in the solar energy space and having a Ph.D. in sustainability from Rochester Institute of Technology.

HCB News reached out after learning that the organization was working toward a 100 percent renewable, carbon-free electricity goal by 2025. With 2025 just seven years away and knowing how slow it can be to move a health organization in a particular direction, the goal was attention-getting. Waller says that while the goal was publicly announced in late October of 2017, it was in discussion basically since he started. The initial step toward that carbon-free electricity goal was taken with the installation of the first solar array on top of the health system’s administrative building.

“The array is about half a megawatt,” said Waller. “After all the work we did to understand the renewable business and how it impacts us and how we could make it financially feasible, we were able to plan out to a certain extent, the next seven years, on how we could achieve our goal.”

The work isn’t just about installing solar panels. It actually brings in a variety of strategies. Waller said it boils down to a combination of improving energy efficiency by reducing electricity usage as well as continually looking for ways to improve other aspects of electricity usage, and then using renewable energy sources for that reduced need. But it’s not a straightforward process.

“That final piece, using renewable energy for our electricity, is more difficult particularly for a lot of our smaller locations. In some cases, we might partner with a group that has already developed a renewable project nearby. It’s just the nature of things. We might add a small practice in a week, for example, and then we’d decide on a case-by-case basis whether to build a source or purchase something that’s already been built.”
1(current)
2
3

Q&A with Diane Hupp, president of UPMC Children’s of Pittsburgh

Provider Spotlight - Behind the scenes at Unity Health Care