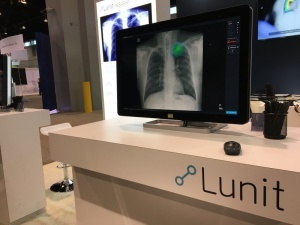 CHICAGO — While artificial intelligence (AI) dominated plenty of conversations at the 2017 RSNA annual meeting, South Korean company Lunit was one of a few exhibitors to provide a live demonstration of its AI solution for image analysis.

More than a quarter of lung cancer cases were missed on chest X-rays, according to the National Lung Screening Trial, and Lunit is looking to decrease the proportion of missed cases.

The solution, which shows the level of abnormality and where the AI detects it within the image, is accessible via the Google Chrome browser. Radiologists can upload up to 10 X-rays per day for free, in order to become more familiar with the product, though it has not received FDA clearance. Brandon Suh, chief medical officer for Lunit, said clinical studies for the regulatory process will start early next year.

The Lunit INSIGHT was on display at the new Machine Learning Showcase on the show floor.

The company’s ultimate goal is to partner with imaging companies and PACS vendors and develop a solution that is integrated into the routine clinical workflow.

Suh said they have been talking to other companies, including Nuance and TeraRecon, about ways to collaborate and have tested integration within their platforms.

“I don’t think there have been many cases where an AI product is actually being routinely used by radiologists,” Suh told HCB News at the show. “I think right now it’s more being tested, exploring ways [that] this can be used.”

Radiologists are expressing more interest in Lunit’s technology at the show, something that was seen in general at RSNA.

“With AI and radiology, before it was more about potential,” Suh said. “Right now it’s actually becoming more of a reality. Radiologists are … more interested because it’s going to become a reality soon.”

Lunit is also in the final stages of developing an AI solution for mammography, and expects to release it publicly in the first quarter of next year. The company is also looking to develop solutions for digital breast tomosynthesis, chest CT and coronary CT angiography.