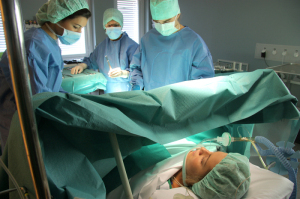 Maintain a sterile operating
field and track outcomes
There are a variety of ways a hospital can mitigate their risk of surgical site infections, but it's difficult to pinpoint the most effective ones.

New research published in the Journal of the American College of Surgeons found that hospitals should focus primarily on maintaining a sterile operating field and tracking and reporting outcomes.

One percent of all surgical patients contract an SSI during their surgical procedure, according to a recent study published in the American Journal of Infection Control. For gastrointestinal surgical patients, that rate is 30 percent higher and associated with an additional $20,000.

Hospitals are also under pressure from CMS to reduce SSIs through the Hospital-Acquired Condition Reduction Program. Those with the highest rate of hospital-acquired conditions are penalized through reimbursement reductions.

A team led by Dr. Thomas A. Aloia of the University of Texas MD Anderson Cancer Center surveyed surgeon leaders at 20 hospitals affiliated with the Texas Alliance for Surgical Quality. The respondents were asked to rank how well surgery, anesthesia and nursing staff adhered to certain infection control practices.

There were a total of 38 practices that were placed in six different categories — attire, preoperative preparation, during-surgery protocols, antibiotics, postoperative care and outcomes reporting.

The majority of the hospitals achieved maximum adherence to surgical care improvement project metrics, including removing hair around the wound site with clippers and properly using preventive antibiotics.

Hospitals with the lowest SSI rates were the most compliant with the practices of showering patients before the operation, deploying best practices for preparing skin in the OR and using clean instruments, gowns and gloves.

In addition, hospitals that reported outcomes data on a monthly or quarterly basis to their surgeons, departments and institutions also ranked the highest.

Alternatively, OR attire practices such as those that applied to keeping personnel away from the immediate field of surgery, have no impact on SSI rates. Those included specific rules for surgical caps, undershirts, shoes and shoe coverings, restrictions on jewelry and nail polish, coverage for forearms, head and facial hair and the presence of personal bags.

The team plans to feed the data back to the participating hospitals and then revisit in a year to see how the lower performing hospitals change their infection control practices. If performance improves it would validate the results of this study.