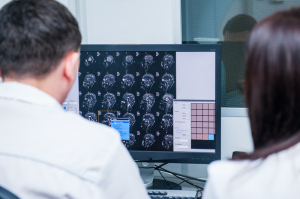 Gadolinium contrast agents are used in 40 to 50 percent of MR scans and, by some estimates, roughly 400 million doses have been administered since it was introduced in 1988.

For most of those years, the agent appeared to have virtually no drawbacks, but over the last decade or so, the medical imaging community has been forced to reexamine that narrative.

In 2006, researchers discovered that the agent put patients with renal insufficiencies at risk of nephrogenic systemic fibrosis. Then, in 2013, findings surfaced suggesting that gadolinium could accumulate in the brain of patients undergoing multiple scans.

Since then, the question that remains unanswered has been: what are the clinical implications for gadolinium accumulation in the brain?

Assessing risks
In March, the Pharmacovigilance Risk Assessment Committee (PRAC) of the European Medicines Agency (EMA) concluded an assessment of gadolinium agents and recommended regulatory actions, including suspension for some marketing authorizations.

Two months later, the FDA weighed in on gadolinium with its own findings. The agency announced that, after a two-year study of the issue, it had not identified adverse health effects from gadolinium retained in the brain after the use of gadolinium-based contrast agents (GBCAs) for MR imaging.

“Our recommendations for health care professionals and patients remain unchanged from July 2015, when we informed the public that we were investigating this potential risk with GBCAs,” the agency wrote in a statement. “Because we identified no evidence to date that gadolinium retention in the brain from any of the GBCAs, including GBCAs associated with higher retention of gadolinium, is harmful, restricting GBCA use is not warranted at this time.”

Despite those findings, an FDA panel voted in September to add retention warnings to the labeling of gadolinium agents. The group also voted unanimously (15-0) in favor of requiring contrast manufacturers to conduct more studies aimed at understanding the implications of gadolinium retention and any health risks that may accompany it.

Macrocyclic versus linear gadolinium contrast agents
Gadolinium retention rates appear to be lower with macrocyclic agents – such as Dotarem (Guerbet), Gadavist (Bayer) and ProHance (Bracco) – than with linear agents. For that reason, the PRAC recommendations refer to linear agents – such as MultiHance (Bracco), Omniscan (GE Healthcare), Magnevist (Bayer) and Optimark (Guerbet).

Still, in some cases, the PRAC recommended keeping particular linear agents available. For example, it determined that gadoxetic acid (a linear agent marketed by Bayer as Primovist in Europe and Eovist in the U.S.) should remain on the market because it meets an important diagnostic need in patients with few alternatives.
1(current)
2
3