Hospitals and imaging centers all have the same goals when performing MR exams: increasing patient satisfaction and achieving good outcomes while containing costs.

To that end, MR scanner and coil manufacturers are releasing new products with these goals in mind, allowing for faster scanning speeds with clear images, and coils and other products to make an often-uncomfortable and anxiety-producing exam as comfortable as possible.

Here’s a guide to the newest MR products that have come out within the last year: 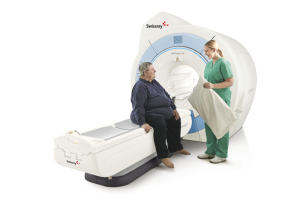 In the U.S. and Europe, Alltech formed a strategic partnership with Swissray, which has exclusive rights to sell the system as the SR Pulse 710. The system has the widest internal bore diameter at 71 centimeters, a patient table weight limit of 550 pounds, and addresses neuro, orthopedic and body MR imaging.

Swissray has one beta install up and running and is installing another system at a new site in October, says Anne Sheehan, director of MRI for Swissray International, Inc.

"The market has a gap,” Sheehan says. “Most new 1.5 Tesla systems run around $1 million. For customers who can't afford that price point, there simply is not a supply of used wide bore systems to fill that need. The SR Pulse is perfectly poised to fill that gap, with a 71 centimeter bore, a full range of coils and great throughput potential at a price that competes with refurbished wide bore systems. Our system could also complement an institution with more than one MR, serving as a workhorse system that handles the bread and butter applications — brain, spine and orthopedics — that account for much of our customers' daily routine."

Swissray, long a major player in the digital radiography space, has expanded its sales team to include people with experience in MR sales, and hired a third-party service organization while the company trains its DR service engineers in MR.