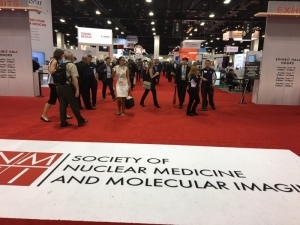 An expanded trial of a radiolabeled somatostatin analogs (SSA) treatment protocol has shown significant promise in improving the quality of life for people with neuroendocrine tumors (NET) most common to the intestinal tract. Study findings were presented at the SNMMI annual conference currently being held in Denver.

About 8,000 new NET cases are diagnosed annually in the U.S.

“SSA have shown significant promise during the past two decades in the management of metastatic neuroendocrine tumors, but the data thus far came primarily from small trials and institutional series,” Dr. Jonathan Strosberg, associate professor at the Moffitt Cancer Center in Tampa, Florida, told HCB News. “I was very excited to be involved in the first prospective randomized clinical trial designed to test the efficacy of a radiolabeled SSA with a high level of evidence.”

“The primary endpoint of the trial was progression-free survival, and it was markedly improved with Lutathera,” said Strosberg. “There was also early evidence of improvement in overall survival, which needs to be confirmed on final mature analysis.”

According to Strosberg, these are important findings in part because they may reassure patients concerned about toxicities associated with a new cancer treatment.

Lutathera is not yet approved by the FDA for use in the U.S., although it is undergoing priority review. However, according to the website of the drug’s maker, Advanced Accelerator Applications, Lutathera has received orphan drug designation in the U.S. and Europe.

The site also states that the drug is currently administered on a compassionate use and named patient basis for the treatment of NETs and other tumors over-expressing somatostatin receptors, in ten European countries and in the U.S.

“There are very limited treatment options for patients with midgut neuroendocrine tumors whose tumors progress on first-line somatostatin analog treatment,” said Strosberg. “Lutathera is an option with the potential to significantly delay tumor progression, to significantly shrink tumors in about 20 percent of cases, and to positively affect quality of life.”

He said the team will have final data on overall survival rates for the protocol in the next year or two.