Study suggests radiologists are more 'patient facing' than you think 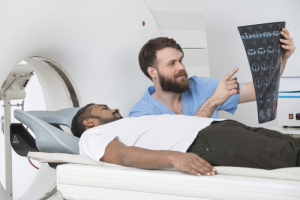 Diagnostic radiologists serve more Medicare patients than any of 56 other medical specialties — a finding that researchers say exposes a unique opportunity to engage patients and better brand the specialty with the public.

The study was conducted by the Harvey L. Neiman Health Policy Institute and the American College of Radiology (ACR), and the findings were presented at the annual ACR meeting underway this week in Washington, D.C.

"This data demonstrates that radiologists are an integral part of the facilitation of national health care," Dr. Kristina E. Hoque, neuroradiology fellow at the Keck School of Medicine at the University of Southern California, told HCB News. "Although radiology is perhaps not traditionally viewed as a 'patient facing' discipline, the culture of radiology is evolving to encourage greater interaction with both members of the health care team and patients."

The study of 2013 Medicare diagnostic procedures found that radiologists served an average 3,150 beneficiaries a year. Other top specialties in the number of patients cared for also included cardiologists, cardiac electrophysiologists, and dermatologists. Interventional radiologists ranked 8th in the study, while nuclear medicine physicians ranked 16th. In all, 56 uniquely identifiable physician specialists were included in the study.

Because radiologists most often work directly with referring doctors rather than patients, there has been a widespread, lively debate around payment reform in the move away from fee-for-service. The question is: should radiologists be considered patient facing as with most other medical specialties?

According to Hoque, the study has implications for new payment models for physician compensation under the pending Merit-Based Incentive Payment System (MIPS). It has been widely assumed that radiologists were most likely to receive payments under an alternative payment model (APM), given the specialty is not as patient-facing as other medical specialties.

However, Hoque said that while there are many potential types of APM under consideration, the Physician-Focused Payment Model (PFPM) may be a particularly good fit for radiology. As implicated in the study, radiologists have the opportunity to approach health care delivery creatively.

"PFPMs allow us to demonstrate value added to health care," said Hoque. "Knowing that the radiologist touches more lives than any other medical specialty, we are empowered to champion the PFPM model development and become leaders among the other medical subspecialties in redesigning the implementation of national patient care."

She said the study team hopes that the findings inspire a national discussion on the evolving culture of radiology. She is hopeful that the findings encourage the adaptation of the Imaging 3.0 patient-centered guidelines advocated by the ACR.

"As radiologists continue to play a more prominent role in patient care, it is critical to emphasize a value-based patient-centered mentality," said Richard Duszak, M.D., FACR, professor and vice chair for health policy and practice in the department of radiology and imaging sciences at Emory University. He is also affiliate senior research fellow at the Neiman Institute. "In effect, not only will radiologists continue to touch more patient lives than any other medical specialty, they will also perhaps impact the practice of other subspecialties more than any other type of physician."