Radiopharmaceutical supply and demand in the era of precision medicine

Radiopharmaceutical supply and demand in the era of precision medicine 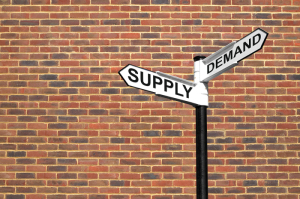 From the June 2017 issue of HealthCare Business News magazine

With the increasing need for more information to be gained from each individual diagnostic test, scientists have been harnessing the characteristics of diseases unique to each patient to aid in determination of treatment planning. Surveys of the distinctive chemistries of individual tissues within a living organism cannot be accomplished with classic anatomical imaging techniques, such as X-ray, CT and ultrasound, but require molecular imaging techniques, such as PET. No other individual test can be claimed to be more influential for the growth of PET above 2-deoxy-2(18F)fluoro-D-glucose or [18F]FDG.

Early studies found that synthetic analogs of glucose containing a fluorine in place of a hydroxyl group in the 2 position of the carbohydrate backbone were easily and rapidly taken up by cells, but became trapped within the cells as the normal glucose metabolic pathways could not progress past the first phosphorylation event.

This resulted in an accumulation of these glucose analogs within the cell and could, by extension, be seen within cells with elevated glycolytic activity, such as rapidly proliferating cancer cells. By replacing the normal fluorine atom in these compounds with the radioactive isotope fluorine-18, [18F]FDG PET was born. First administered to healthy human volunteers in 1976, the compound quickly gained favor as an imaging agent for a variety of neuropsychiatric disorders, but arguably found its greatest utilization in the world of oncology.

With the rapidly evolving technology of both producing [18F]FDG and detecting the radioactivity produced in a three dimensional field of view, the supply of the drug has far out-weighed the demand in recent years. One could argue that the technology involved in the production of [18F]FDG, primarily the cyclotron production of the raw fluorine-18 and the automated synthetic units used to produce the drug, has outpaced the demand for the drug in such a way that the field has been flush with availability, causing a dramatic downturn in the price per dose in recent years. In reality, the relatively low cost per dose of [18F]FDG has been a benefit for facilities that purchase the drug from commercial vendors, but has been highly detrimental to the facilities that prepare the drug for internal use and rely on reimbursement to subsidize the cost of production and auxiliary research and development.
1(current)
2