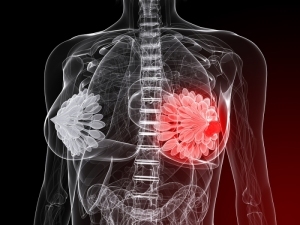 A new study found that the risk for recurrence of cancer was most likely in the same breast and not the opposite, unaffected breast — evidence that runs contrary to the growing practice of bilateral mastectomy for women diagnosed with ductal carcinoma in situ (DCIS).

"Overall survival after treatment for DCIS is excellent, yet studies have shown that women with DCIS are increasingly choosing bilateral mastectomies," Dr. Megan Miller, breast surgical oncology fellow at Memorial Sloan-Kettering Cancer Center and lead study author, told HCB News. "This may, in part, be driven by misperceptions about the risk of contralateral breast cancer."

The study — which was presented at the annual meeting of the American Society of Breast Surgeons — looked at 2,750 DCIS patients who underwent breast-conserving lumpectomy surgery and found only 2.8 percent developed a second contralateral (other breast) cancer in five years, while only 5.6 percent did so after 10 years.

While recurrence of DCIS in the original breast was greater in patients younger than age 40, women who received post-surgical radiation treatment and/or endocrine therapy had significantly less recurrence.

"This low risk of contralateral breast cancer should not prompt patients or physicians to choose contralateral prophylactic mastectomy," said Miller. "The breast with the DCIS should be the primary consideration in treatment decisions."

The study found that "surprisingly", factors such as younger age, a family history, and treatment time frame did not correlate with the development of new tumors in the opposite breast from the initial cancer. Many of these factors were associated with the cancer returning in the original breast although, as noted above, the risk is low.

According to the American Cancer Society, DCIS accounts for 83 percent of the approximately 60,000 new cases of breast carcinoma diagnosed annually in the U.S.