What makes for a smooth EHR transition? The right culture 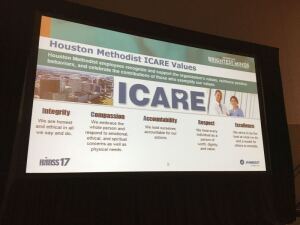 #HIMSS17
Monday at HIMSS, IT leaders from Houston Methodist (HM) suggested performing a common EHR transition at a large health care system in an uncommon way: relying on their core values to inspire not only employees — but the contractors too.

The seven-hospital system, with a total of 135 locations, commenced its go-live in early 2016 and is two-thirds of the way through the complete transition. In fact, three community hospitals converted to the new EHR just three days prior to HIMSS.

However, the real story at HM is how the organization put its core organizational values to work. This is easy to say and hard to do, as command and control leadership, rather than inspirational servant leadership, is still the rule in hospitals.

“Culture is critical and ingrained in the fabric of HM,” Black told HCB News. “Our annual reviews are built around our values and their measurable behaviors.”

For example, at the beginning of the EHR conversion, when extra IT was being hired to gear up, each IT employee received a letter from the hospital CEO promising that when the conversion would be complete, they would not be laid off. They would, the letter read, have a place at HM as long as they performed according to the organization’s measurable values.

This courtesy also extended to the large contractor workforce, according to Black.

Alan Perkins, a principal at the Claritis Group who was hired to be a consulting associate vice president for IT, and Black’s supervisor for nearly three years (“a partnership” said Perkins), also was reverent of the HM culture. He too attributed the successful EHR conversion to the core value drivers.

While all hospitals have stated core values, in most, these are a passing curiosity, rather than a living, working document. The values were evident throughout the presentation.

“One day I got to make phone calls to contractors advising them that they had a year contract, but they were expected to take three weeks vacation (paid). Those were fun calls to make,” she recalled.
1(current)
2